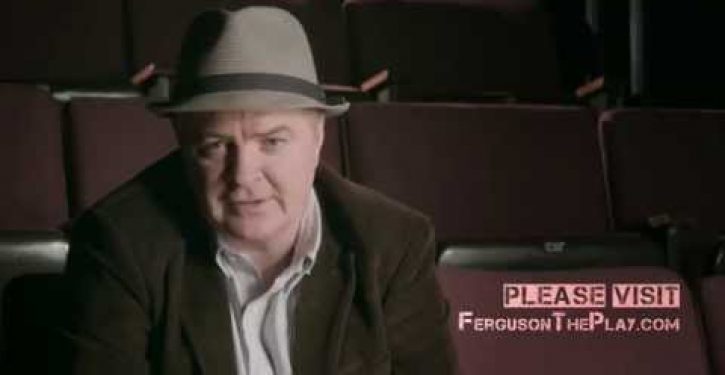 “Ferguson”— a play featuring a live, staged reenactment of the death of Michael Brown — is set to open today in Los Angeles.

Several cast members quit less than a week before the play’s debut because they didn’t think it did enough to portray Brown in a positive light. Phelim McAleer, the play’s author, told the Daily Caller News Foundation that he’s going through with the show even if he has to perform it himself.

The play is using something called “verbatim theater,” which means it was written based entirely off words from grand jury testimony. The performance will allow the viewer to see different perspectives of what happened that day with Brown and the police officer who killed him.

At the end, the audience will vote on whether officer Darren Wilson should be indicted.

“I think people will be very, very shocked and surprised at the evidence they’ll hear that is not what the media told them,” McAleer told TheDCNF.

The play has already taken heat from critics, who say it will only inflame already tense relations and fuel the anger behind rioting.

McAleer said that the criticism is largely from people who are afraid their bias will be exposed by the truth of his play:

McAleer insists he is just trying to tell the truth and let people decide for themselves:

I tried to tell the truth about the last hours of Michael Brown’s life. There’s no taking sides, but people are getting upset because they know all the myths and half truths that they spread are not there.

Whether the filmmaker — who is known for the production of documentaries like “FrackNation” and “Not Evil, Just Wrong” — will follow through with that promise remains to be seen.

McAleer, who said he wants to take the play on the road, eventually playing in Ferguson, continues to raise money for the production through an Indiegogo crowd funding campaign. The effort has raised about $95,000 so far, just over the stated goal of raising $93,000.