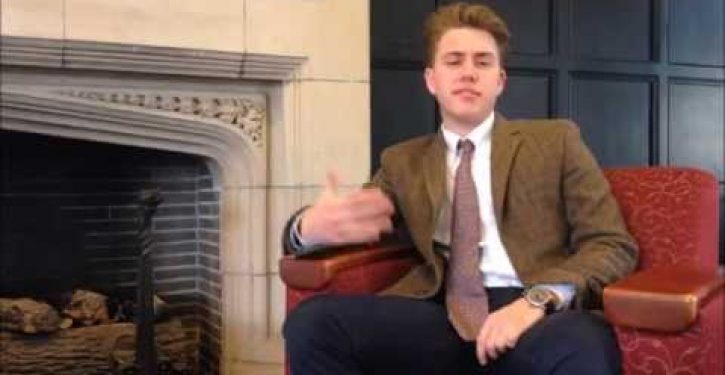 The University of Chicago (UChicago) has contributed $25,000 to help a student hold a “National Symposium on Hanging Out,” the College Fix reports.

UChicago is frequently ranked as one of the country’s most stressful colleges, but senior Alec Goodwin thinks he might be able to change that by teaching people the fine art of chillaxing.

“Hanging out. Everyone does it, but how much do we really know about it?” Asks Goodwin in his video pitch for the symposium.  The pitch is quite laid-back, to say the least, indicating Goodwin may be the perfect person to help teach the finer points of chilling to his stressed Chicago colleagues.

The money is coming from the Uncommon Fund, a pool of cash maintained by UChicago’s student government, which makes annual grants for students to pursue creative and unconventional ideas. Goodwin’s grant of $25,000 is more than a quarter of its 2015 budget, with other awards going towards a pig roast, bubble soccer, and other activities. The fund is partially paid for through student activity fees, meaning that every student at UChicago has now put a small amount of money to promote scholarship in the field of hanging out.

A staff adviser to the Uncommon Fund said that Goodwin was able to draw such a large amount of money because he proposes to bring in several notable speakers to discuss hanging out. Among others, Goodwin wants to invite Vice President Joe Biden, actor James Franco (“for his masterful depiction of hanging out on-screen”), and local Chicago rapper Chief Keef.

In addition to having speakers, Goodwin wants to host several workshops, with tentative suggestions including “Maxing and Relaxing,” “Advanced Time-Killing,” and “Hanging Out v. ‘Hanging Out.’”

The Uncommon Fund has been criticized by some students at UChicago, who argue that awards are made in an opaque manner without clear guidelines for what deserves to be funded.