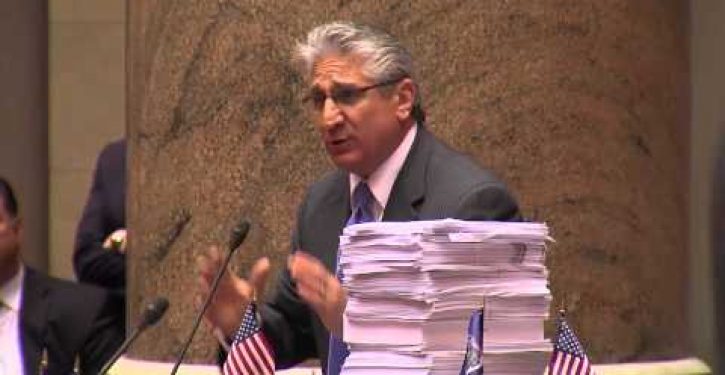 Is New York Governor Andrew Cuomo smarter than a fifth grader? Assemblyman Jim Tedisco (R) aims to find out. The lawmaker, who has sponsored the Common Core Parental Refusal Act and started a petition urging Cuomo urging him to support the legislation, has issued an open challenge to the governor.

Watch Tedisco’s speech on the floor of the Assembly:

If the Governor thinks the Holy Grail of education is testing, he should take the 5th grade math and ELA tests and publicly post his results because I don’t think he’s smarter than a 5th grader — and he shouldn’t be doubling down on these terrible high stakes tests that are bad for students, bad for educators and bad for New York.

With the new Common Core Parental Refusal Act, schools will be required to inform families of their rights when it comes to test refusal, along with a response form ensuring that those rights have been viewed.

The legislation will prevent schools and teachers from being penalized based on the number of students who opt out. Students too, will neither be punished nor rewarded based on their participation, or lack thereof, in the standardized testing.

The Mental Recession recently reported on two New York teachers who themselves have vowed to opt out of Common Core testing, with one hoping such actions would implode the system, while the other simply refused to set her students up for failure.

Last year, reports indicated that the number of kids opting out was having an effect on schools, with participation rates putting districts on peril of losing federal grant money.