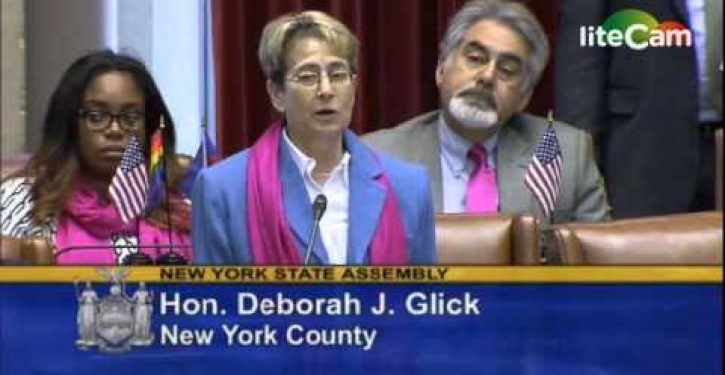 Yesterday, Democrats in the New York State Assembly argued for and helped pass a controversial abortion bill – AB 6221.  The legislation, now a standalone that was previously a divisive tenth plank of the Women’s Equality Act, passed mostly along party lines.

The bill expands third-trimester abortions and allow non-doctors to perform abortions. The National Right to Life organization has deemed it “abortion on demand,” allowing abortions “for any reason deemed “relevant to the well-being of the patient” including physical, emotional, psychological, and familial factors, and the mother’s age.”

The bill was sponsored by Deborah Glick (D), who took to the floor to argue that having an abortion is a woman’s “Constitutional right.” She argued that legislators don’t really have a right to oppose abortion because they’ve never faced an unwanted pregnancy themselves.

Glick went on to say that those with “strong religious beliefs” shouldn’t be able to deny others with “no religious beliefs” the exercise of their right to an abortion, adding that those same legislators and religious individuals won’t be there to help a woman “pay the rent, [or] the necessary expenses of life if that woman already has more children than she can provide for.”

But at one point in her remarks, Glick went off the rails, claiming that “many, many” women are “totally and completely thrilled” to have had an abortion. Here is the video. A transcript follows:

The bottom line is, it’s a woman who will suffer consequences that impact her life in many ways. We’ve heard that there are people who have regretted an abortion. [Shrugging]  There are some. But there are many, many women who are totally and completely thrilled that they had the opportunity to control their lives and what their future would be.

I’m not sure I’ve ever heard the phrase “totally thrilled” used in conjunction with abortion, regardless of which side of the political aisle one falls on.

Long Island Republican Michael Fitzpatrick argued against the bill, saying he was standing up for those who could not speak – the unborn child:

So in memory of the millions of children who never had the opportunity to be New Yorkers, I cast my vote in the negative.

Fortunately for those children, leaders in the Republican-led Senate remain adamantly opposed to the bill.