The mainstream media fashioned a ridiculous narrative about how Republicans were avoiding the 50th anniversary of the civil rights march in Selma. The New York Times dutifully obliged by cropping former President George W. Bush and First Lady Laura Bush, who did attend, from a front page photo.

Tens of thousands of people gathered at the site the 1965 “Bloody Sunday” march, the violent confrontation that paved the way for the passage of the Voting Rights Act.

The Washington Post published a column in which they insinuated that no Republicans were heading to Selma to commemorate the event – because of course, racism!

But as Kemberlee Kaye of Legal Insurrection notes, “Members of both political parties descended upon Selma, Alabama” this weekend. Kaye added, “Partisan politics were shelved as members of Congress were unified in remembering the sacrifice of those who marched for freedom.”

The New York Times however, went out of its way to perpetuate the myth that Republicans weren’t in attendance.

Here’s an original with the Bush’s on the right (naturally). The picture is followed by a closeup.

And here is the picture the Times ran with:

Tim Graham of NewsBusters notes that the Bushes were at least mentioned in the Times report – ten paragraphs in.

Joining Mr. Obama on Saturday was former President George W. Bush, who signed the reauthorization of the Voting Rights Act in 2006, as well as more than 100 members of Congress. About two dozen of them were Republicans, including the House majority leader, Kevin McCarthy of California. While sitting onstage, Mr. Bush made no remarks, but rose to his feet to applaud Mr. Obama, and the two men hugged afterward.

In a media age where a significant number of people get their news by scanning headlines, it seems as though the Times’s selective editing was no accident. 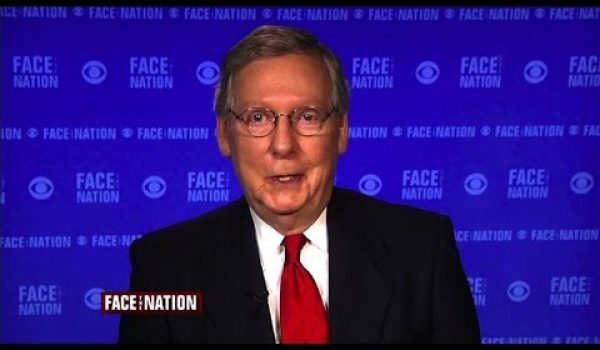