A North Dallas Walmart refused to print an engagement photo depicting a young, clean-cut couple embracing in an outdoor setting and featuring a shotgun resting on the soon-to-be groom’s left shoulder.

The reason given by the clerk is that it promotes “gang culture.”

The couple, Stephanie Wehner and Mitch Strobl, planned to display 13 photos at their wedding, which is scheduled this weekend. Each photo was chosen to display those things that are important to them, according to local ABC affiliate WFAA News 8.

“It depicts our love for each other, and I wanted to be able to display those at the reception,” Wehner told the station.

The photo featuring the shotgun was important, given Strobl’s occupation. He writes outdoor recreation and gun safety manuals.

“She came with the idea to take a creative picture where we include something that is important to us,” Strobl explained.

One of the 13 photographs submitted included Mitch’s 12 gauge Ruger Red Label Shotgun. He said it was the first gun that he had purchased himself, calling it his “go-to” gun for outdoor sport.

When Wehner arrived at the Walmart at Central Expressway and Midpark Road to pick up the prints, she was told the photo with the firearm would not be released.

“She was very nice, but very matter-of-fact, like she was not going to budge or give me my photo,” Wehner said.

She also received the following written explanation, reading, “MINUS ONE 5 X 7. NO WEAPONS.”

That’s when the clerk claimed that “no gun photos” was a store policy and that printing it would promote “gang culture.”

“To automatically to be lumped into that category of a gang … that hits a little close to home for us, because that isn’t our intent at all,” Strobl told the station.

A Walmart representative later told News 8 the chain has no policy against printing out pictures with firearms.

“We had a new associate who was misinformed. Her actions are not consistent with our policy,” the spokesperson said. Walmart also told us that it has reiterated policies with its employees at this store.

The couple plan to have the gun photo printed in time fort the big day — just not at Walmart. 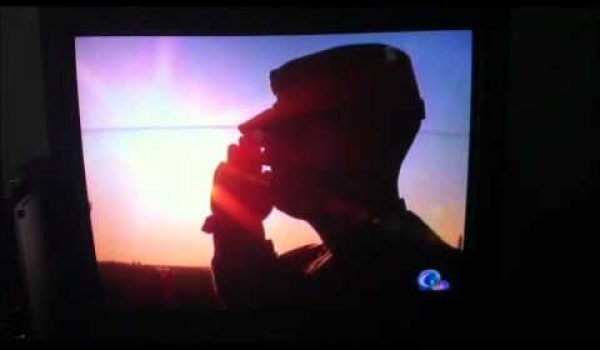 NBC omits ‘under God’ from Pledge of Allegiance — for the third time (Video)
Next Post
BREAKING: Hebdo suspects cornered outside Paris by police, claim they want to ‘die as martyrs,’ hostage