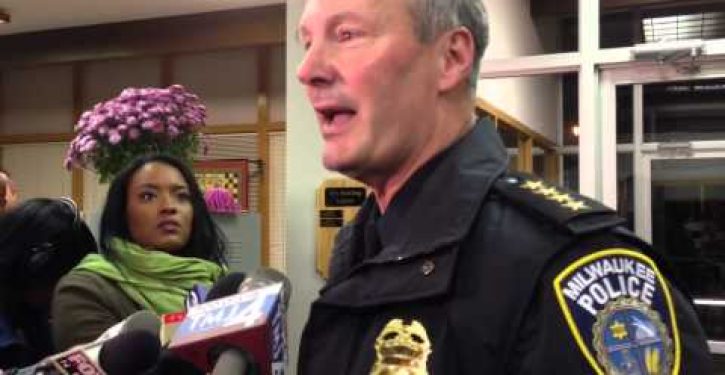 While discussing a case in which a 5-year-old girl was shot and killed while sitting on her father’s lap, Milwaukee Police Chief Edward Flynn went off on the lack of concern when it comes to black-on-black crimes in his city.

His statements may serve as a reminder of the selective outrage exercised by protesters and media in Ferguson, Mo., where a grand jury decision in the case of officer Darren Wilson was revealed last night. Wilson will not face indictment for his role in the shooting death of Michael Brown, a black teen who was unarmed at the time of the incident.

Flynn, who had just been informed of the shooting of the 5-year-old girl, was clearly upset by the lack of focus on the real race issues in his city.

Man oh man this is awesome. Police Chief Edward Flynn spoke to reporters on November 6 after a Fire and Police Commission meeting concerning the shooting of Dontre Hamilton. And he doesn’t hold back with the brazen truth about people who care more about a black teen shot by a cop than they do about all the violent crimes against blacks in Milwaukee, something he says is the true threat to the racial disparity.

He really gets heated when asked about criticism that he was on his phone during the meeting. He had gotten a call about a black 5 year old girl shot in the head and killed by a drive by shooter while sitting on her daddy’s lap. And he doesn’t mince words about it.

Well I was on my phone and yes, that’s true. I was following developments of a 5-year-old little girl sitting on her dad’s lap who just got shot in the head by a drive by shooting. And if some of the people here gave a good God damn about the victimization of people in this community by crime, I’d take some of their invective more seriously.

Flynn went on to say that the same people protesting are MIA when it comes to actually trying to solve the problem of crime in his city.

Newly uncovered memo shows how Holder got prepped to mislead American people on Fast & Furious
Next Post
Obama on Ferguson: U.S. ‘has more work to do’ on race relations