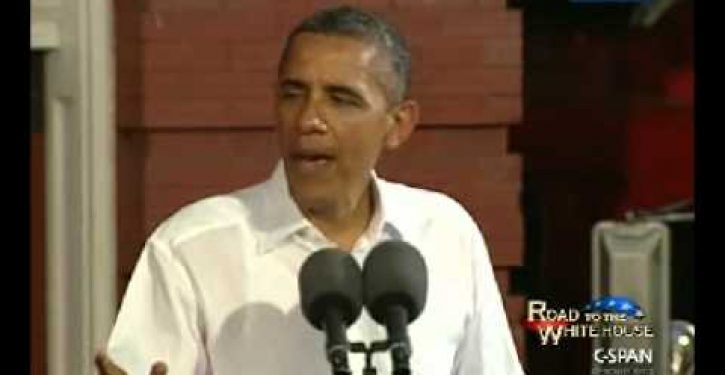 Potential Democratic presidential nominee Massachusetts Senator Elizabeth Warren spoke at the George Soros-funded Center for American Progress on Wednesday, where she assured her progressive audience that the 2014 election outcome was not a referendum against big government, rather, people are worried about “who government works for.”

This is not about big government or small government. It’s not the size of government that worries people. Rather, it’s a concern for who government works for.

While Warren is correct that Americans realize that the federal government is no longer working for them, the size of government is a major concern for those who fund the government through their taxes.

In January, a Gallup poll reported:

One reason Americans are dissatisfied with how the government system is working is that they believe it is too big and powerful. Two-thirds of Americans (66%) are unhappy with the size and power of the federal government.

Here is a chart tracking American’s dissatisfaction with the size and power of the federal government:

Democratic politicians, who pledge an oath to the Constitution, consistently make the case for big government, despite their knowledge of the system of “limited government” as envisioned and implemented by America’s founding fathers.

While speaking of the size of government, James Madison wrote in Federalist 48,

It will not be denied that power is of an encroaching nature and that it ought to be effectually restrained from passing the limits assigned to it.

Warren continued to praise the progressive style of governance, telling her audience that strict regulations on the financial sector and “investments” in state universities, roads and bridges caused Americans to thrive, but all that was taken away when Republicans sought to deregulate “Wall Street,” which caused the 2008 economic recession.

The 2008 economic recession can be traced to disparate impact policies, and believe or not, a young Barack Obama was heavily involved in the promotion of these policies. In fact, he was “a pioneering contributor to the national subprime real estate bubble.” But Obama did not start the crisis, although he was certainly a part of it. In fact, the problems began with the 1977 Community Reinvestment Act, which were compounded under President Bill Clinton, and then again under President George W. Bush.

Consider an excerpt from this article foreshadowing the crisis by the author of “America’s Trillion-Dollar Housing Mistake: The Failure of American Housing Policy,” Howard Husock from 2000:

The Clinton administration has turned the Community Reinvestment Act, a once-obscure and lightly enforced banking regulation law, into one of the most powerful mandates shaping American cities—and, as Senate Banking Committee chairman Phil Gramm memorably put it, a vast extortion scheme against the nation’s banks. Under its provisions, U.S. banks have committed nearly $1 trillion for inner-city and low-income mortgages and real estate development projects, most of it funneled through a nationwide network of left-wing community groups, intent, in some cases, on teaching their low-income clients that the financial system is their enemy and, implicitly, that government, rather than their own striving, is the key to their well-being.

As reported at WayneDupree.com,

The bottom line is that banks were strong-armed by groups such as the criminal enterprise once known as ACORN to give loans to people who could not afford them. The banks sadly folded under pressure perhaps, at least initially, for fear of being referred to as “racist.” If the government was not meddling in their business, those loans would never have been given because they did not make financial sense. But banks, who knew that the loans were backed by the taxpayer-funded government sadly allowed themselves to be trampled upon, adding to their bottom lines and pushing the costs, once again, on taxpayers who believe their representatives are actually representing them. Despite the fact that they are now paying a heavy price, in addition to being the scapegoat for the 2008 recession, banks can only blame themselves.

In an incredibly revealing New York Times article from 2008, the authors did a good job of proving that the crisis was due to government policies promoted by President George W. Bush. The authors, however, forgot to mention that banks were not only under pressure by George Bush, but also by activists, academia and Democrat politicians. Instead, they blamed “lenders who peddled easy credit, consumers who took on mortgages they could not afford and Wall Street chieftains who loaded up on mortgage-backed securities without regard to the risk.”

So, to summarize, banks stupidly did what they were told in lending to those who could not afford it, then they were blamed by the people who pushed them to make the bad loans in the first place as being “predatory lenders” who caused the 2008 economic recession.

A wise and frugal government, which shall leave men free to regulate their own pursuits of industry and improvement, and shall not take from the mouth of labor the bread it has earned – this is the sum of good government.

Warren’s speech has been compared to President Obama’s infamous “You Didn’t Build That” speech, where he also invoked “roads and bridges” to assure business owners that their accomplishments could not have occurred without taxpayer dollars:

Don’t let anybody tell you that, you know, it’s corporations and businesses that create jobs.

Warren made similar comments in 2011, as reported at TheBlaze:

In an essay in the Boston Gazette in October 1771, Samuel Adams wrote,

The liberties of our country, the freedom of our civil Constitution are worth defending at all hazards; and it is our duty to defend them against all attacks. We have received them as a fair inheritance from our worthy ancestors. They purchased them for us with toil, and danger, and expense of treasure and blood, and transmitted them to us with care and diligence.

It would be interesting to read some of the quotes from the founding fathers on limited government to progressive politicians for their response.

This article has been cross-posted at BroadsideNews.com.