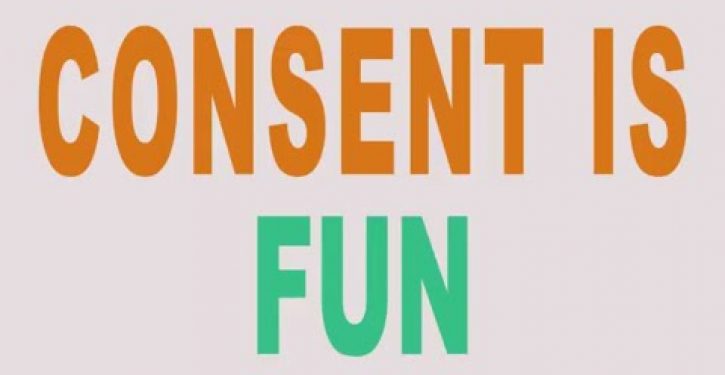 Affirmative consent, also known as “only yes means yes,” is a new standard for evaluating sexual assault that is surging in popularity on the nation’s college campuses as a purported solution to the supposed campus “rape crisis.”

The standard holds that all individuals must seek explicit prior consent for every individual aspect of amorous conduct, even relatively minor acts such as kissing or touching. Woe betide anybody who fails to get consent for a wayward kiss, as they can swiftly find themselves guilty of sexual assault.

Many have pointed out that, in addition the major concerns about due process such a standard creates, the repeated consent box-checking affirmative consent requires is just about the least romantic thing ever. Fortunately, the intrepid students of Concordia University in Montreal have given the world a new video showing that affirmative consent is actually “safe,” “sexy,” and above all, “fun.” The result is as unerotic as it sounds

While individuals may dispute just how “sexy” it is to re-obtain permission to kiss five different times, under a stringent understanding of affirmative consent, both people in the video have actually sexually assaulted one another. Affirmative consent rules like the one recently required at all California public universities make it clear that every form of sexual contact, including touching and kissing, requires overt consent before it occurs, not merely in the middle of things.

Yet in the course of the video, both lovers ask one another whether certain kisses and touches are acceptable only after they have already begun, a clear violation of the need for prior explicit consent.