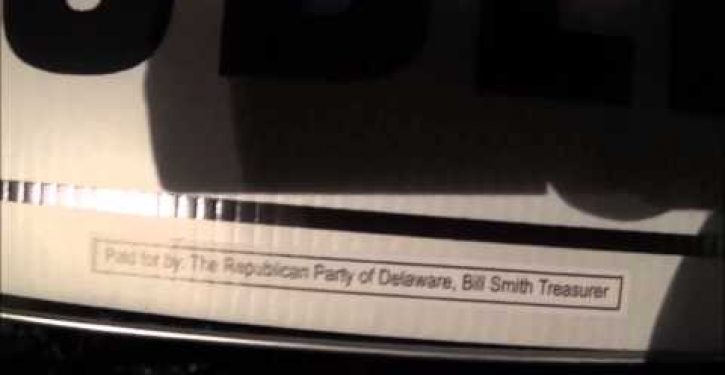 As the number of days to the midterm election can now be counted on the fingers of one hand, Democratic candidates–even incumbents–are getting desperate. In the case of Delaware’s Bethany Hall-Long, that desperation has led to petty theft, according to Delaware Online.

Police in Middletown issued an arrest warrant for Dana Armon Long, the senator’s husband, on the basis of a video depicting him stealing roadway campaign signs saying, “Fix the Economy, Vote Republican.” The bottom of the signs are clearly marked, “Paid for by the Republican Party of Delaware, Bill Smith Treasurer.”

According to Delaware Online:

They were discovered missing on Monday, replaced, and once again removed. After the campaign signs were replaced a second time, campaign volunteers staked out the spot where the thefts were occurring during early morning hours on Wednesday.

Middletown police said the campaign officials observed “a vehicle pull off the roadway in front of the signs. An individual exited his vehicle and began removing the signs.”

The two workers confronted the man and posted video of the incident online.

Republican and Democratic party leaders condemned the thefts on Wednesday.

Long refused to comment on the allegations. “I cannot at this point in time make any comments at the advice of counsel,”

State Republicans had plenty to say, however.

“When you only have a track record of high taxes, unemployment and lower wages for private sector employees to stand on, the Democrats must resort to breaking the law to win elections because they are scared of being held accountable for their dismal performance,” John Fluharty, executive director of the state GOP, said in a written statement.

According to Delaware Online:

John Daniello, chairman of the state Democratic Party, said in a statement that, “Each campaign season, we deal with candidates removing their opponent’s signs. This behavior is absolutely unacceptable. There are more positive ways in which to support your candidate regardless of party affiliation.”

The charge is a Class A misdemeanor punishable by up to 1 year in prison and a fine up to $2,300, including restitution and other conditions set by the court.