LA PLATA, Md. –  La Plata High School filed a “No Trespass Order” against Kevin Wood, a parent and former corporal with the U.S. Marine Corps, who, the school vaguely asserts, “threatened to cause problems that would potentially disrupt La Plata High School” according to a statement posted at Snopes.com, while deeming this story to be a “mixture” of true and false.

As an aside, the statement was also posted on Facebook by school board member Jennifer Abell, who also posted an article earlier this month from the Huffington Post lamenting the “…Conservative Rewrite Of History…” referring to Colorado students who unwittingly protested in favor of their own indoctrination.

As reported at Gazette.net in Maryland,

Morris and La Plata High Principal Evelyn Arnold reported to the Charles County Public Schools central office that Wood in his phone call had threatened to upset the school environment in some way Monday, according to school spokeswoman Katie O’Malley-Simpson. O’Malley-Simpson declined to elaborate on what threats Wood had made.

It started when Wood noticed that his daughter’s world history class “talked about Muhammad and the tenets of Islamic religion…comparing it to Christianity, but without allowing Christians to be heard…” as reported first by Faye Higbee of misguidedchildren.com, who posted the entire assignment.

Kevin’s wife, Melissa Wood told the Brenner Brief about the “threat” that prompted the school to send an email to parents, saying that her husband requested an alternative assignment for their daughter. When the Gulf War Veteran was told that her daughter would get an “F” if she did not do the assigned work on Islam, Wood told La Plata High Vice Principal Shannon Morris in no uncertain terms what she could do with the assignment, and promised to inform the media of what was happening, saying he would bring a “s—storm” on the school.

A perusal of the text students evidently use, as provided by the aforementioned Jennifer Abell on her blog, finds such statements as:

“Shari’a law requires Muslim leaders to extend religious tolerance to Christians and Jews,” and “The persecuted people often welcomed the invaders and their cause and chose to accept Islam. They were attracted by the appeal of the message of Islam, which offered equality and hope in this world.”

Ironically, the text seems to contradict itself, as another chapter on Slavery claims “Muslim rulers in Africa justified enslavement with the Muslim belief that non-Muslim prisoners of war could be brought and sold as slaves.” Perhaps “conquered peoples” are different than “prisoners of war.” One of the frustrations about the text is that sources are not provided.

According to Mrs. Woods, Christianity was addressed in a much lessor extent using the most recent version of World History Patterns of Interaction, which students cannot take home. Woods said that she felt the lessons on Islam are cherry-picked and do not portray the actual history of Islam.

Watch a local news report on the Wood family:

Ironically, a similar story was reported in Revere, Massachusetts earlier this month. Watch that report here.

In yet another story posted at Fox News this week, Todd Starnes reported that a third grader in Tennessee brought home a Nation of Islam handout that portrayed the Founding Fathers as racist. The school responded to Starnes’ report saying that the child took the handouts “without permission,” but they were not intended for the children.

the student (without permission) took the sheet from a ‘ton’ of discarded teacher’s material on that table; then, the student took it home and gave it to the parent.

As an aside, if you are interested in what the Founding Fathers actually said about slavery, click here.

Kevin Wood’s story is similar to that of parent Josh Barry, who faced a similar situation after he questioned an assignment that faulted the Republican party for the government shut-down, as first reported at the Examiner.

After expressing his concerns to the school, Cydnee Cohen, a teacher and union leader he had never met contacted a mutual friend from Facebook and referred to Barry as a “neo-nazi” and further lamented that Barry  “…is tea party right wing!” Barry, the parent of an eighth grader at the East Pennsboro Area School District in Camp Hill, Pennsylvania, is Jewish and married to a black woman. The teacher in that case was allegedly “punished,” but it is not known how. Despite calling a parent that she never met a “neo-nazi,” Cohen is still gainfully employed.

This article has been cross-posted. 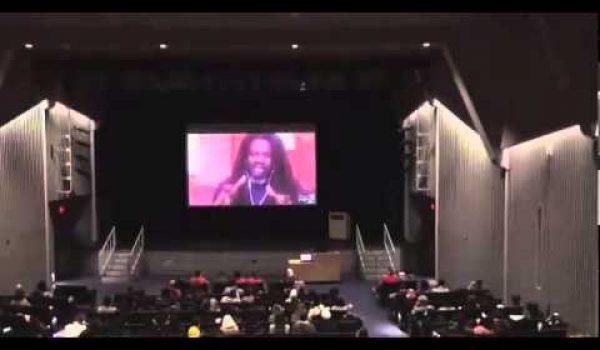