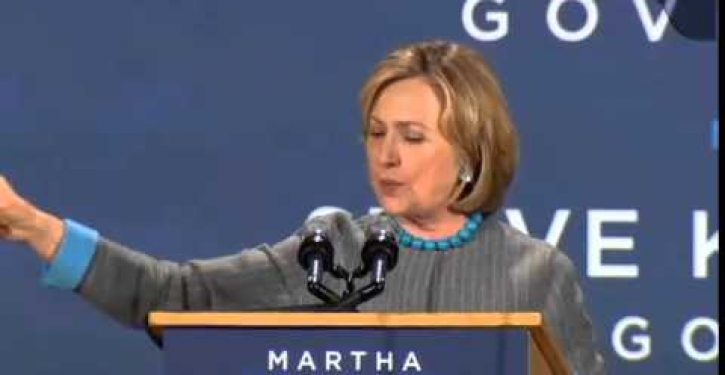 In an statement oddly reminiscent of President Obama’s claim to business-owners that “You didn’t build that,” former Secretary of State Hillary Clinton told a gathering at a Democratic rally Friday that private business don’t create jobs.

“Don’t let anybody tell you it’s corporations and businesses that create jobs,” she said. “You know, that old theory ‘trickle-down economics.’ That has been tried, that has failed, it has failed rather spectacularly.”

So what does create jobs you may ask? She had the answer: Increasing the minimum wage creates “millions of jobs” she claimed.

“Don’t let anybody tell you that raising the minimum wage will kill jobs,” she said. “They always say that.”

Watch the video, via the Washington Free Beacon. Story continues after clip.

Then-Senator Hillary Clinton voted in favor of a minimum wage hike in 2007, under President George W. Bush. In 2008, the housing market collapsed and the nation went into recession.

Clinton didn’t elaborate on when those jobs created by her vote to raise the minimum wage occurred.

That was then. What about today?

Demonstrators, led in large part by members of the Service Employees International Union, have been picketing fast food chains such as franchise giant McDonalds for a year demanding $15 per hour wages.

In apparent response to these demands, McDonalds is now testing out the use of automated cashiers at some of their restaurants.

According to Opposing Views:

The machines are touch screen and will enable customers to order and pay for their food without having to wait in line and interact with a live cashier.

Similar machines are already being used in Europe, and now, the automated cashier is being tested at a store in Romeoville, Illinois, according to reports and one Reddit user.

I’m sure the machines will even include a little electronic voice asking customers, “Do you want fries with that?”