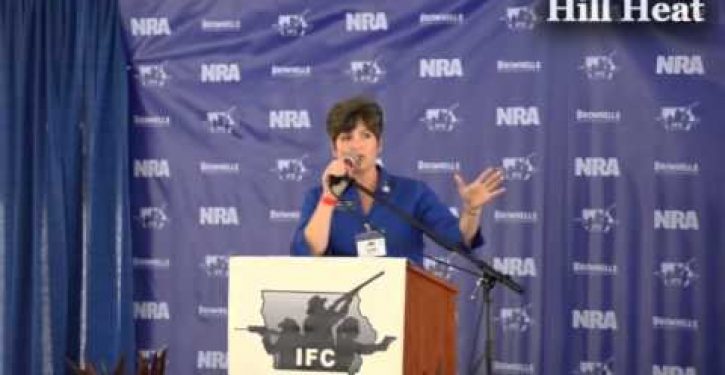 Joni Ernst, Republican for Senate in Iowa, had her excellent debate moment against Democrat Bruce Braley last week, basically executing a slam-dunk in the segment on U.S. policy in Iraq:

“I will remind you that I have served in Iraq,” she told her Democratic opponent, Bruce Braley. “My boots were on that ground that is now held by ISIS. So when we make these decisions, I take them very seriously.”

The Real Clear Politics average of polls showed Ernst gaining dramatically on Braley throughout 2014, and has given her a 2-2.5-point advantage in recent weeks.   So it’s clearly time for the left-wing media to recycle an old Ernst comment from 2012, go into hysterics over it, and try to frame, prejudicially, a philosophical debate on the armed citizen’s rights against the state.

(In leftist terms, the last clause of that sentence would read: “and force Ernst to specify when gun nuts should start shooting at the government.”  Never let it be said that we can’t see the epistemic aperture from here.)

On Wednesday, Huffington Post stepped up to the plate, quoting Ernst’s comment at an NRA rally in 2012:

Joni Ernst, the Republican candidate for U.S. Senate in Iowa, said during an NRA event in 2012 that she would use a gun to defend herself from the government.

“I have a beautiful little Smith & Wesson, 9 millimeter, and it goes with me virtually everywhere,” Ernst said at the NRA and Iowa Firearms Coalition Second Amendment Rally in Searsboro, Iowa. “But I do believe in the right to carry, and I believe in the right to defend myself and my family — whether it’s from an intruder, or whether it’s from the government, should they decide that my rights are no longer important.”

In a showy display of restraint, HuffPo helpfully appended, without editorial comment, a video of an Ernst political ad from this past spring, in which she “took aim” at Obamacare by figuratively pointing a gun at it.  (The gun was real; as an aid to those with an epistemic disorder, I note that it is not literally possible to point a gun, or anything else, “at Obamacare.”)

I’ll be interested to see what effect this has on Ernst’s campaign, if any.  The coyote chorus of the left is in full howl, of course.  A Bloomberg writer, picking up on the HuffPo piece, was quick to lay out for us why Joni Ernst’s gun comments might hurt her chances (Iowans are somewhat friendly to gun restrictions).

MSNBC, like everyone else, also picked up on the HuffPo piece, noting demurely that “Ernst’s comments have reemerged in the weeks ahead of the midterms” (emphasis added).  See ThinkProgress, Salon (“Gun nut’s scary Senate plan: Joni Ernst ready to literally shoot it out with the feds” !!!), DailyKos (“My cute little gun will protect me from dictatorship”), even the stately Washington Post, if you care to survey the noise.

Much of it is hysteria (“scary extremism!” “armed insurrection!”) and innuendo (associating Ernst with “NRA conspiracy theory that background checks will result in gun confiscations and marshal [sic] law”).

But there are a couple of good questions raised, in the sense that people need to think about the questions.  Neither question should tie Joni Ernst’s tongue.  One is Paul Waldman’s at WaPo:

But if Ernst is talking about some hypothetical situation in which government’s disregard for her rights may necessitate an armed response it’s fair to ask her: What exactly is it? Is she saying that when law enforcement officers come to arrest her on some trumped-up charge, instead of submitting and fighting the charges in court she’ll shoot those officers? Who else is an appropriate target here? Members of Congress who pass laws taking away her rights? FBI agents? Who?

The question is tendentiously framed, yes.  But it’s a place to start, in bridging the epistemic gap between left and right.

The initial answer is another question: “Who’s talking about shooting at law enforcement officers?”  That’s not the proposition.  The proposition is that an armed citizenry is a deterrent against government overreach.  Ideally, the actual firepower should almost never have to be used.  Government must and should respect the people because there are far more of the people than there are government officials, and the people are armed.

To see this as a scary proposition, you have to assume about the people that they are so evil and undisciplined that they shouldn’t be trusted even to manage their own affairs, much less vote their governments in and out of office.

The other question, also prompted by Waldman, and taken up by Simon Maloy at Salon, is this one:

[C]omments like Ernst’s reflect a lack of faith in the democratic process and doubts about the legitimacy of the government. “In the American system, we don’t say that if the government enacts policies we don’t like, we’ll start killing people. It’s not clear that Ernst meant this, but it’s fair to ask her to explain what she did mean.”

This too is tendentiously framed, but that’s the very point that needs discussing.  In what way does the armed-citizen concept reflect “a lack of faith in the democratic process and doubts about the legitimacy of the government”?

In fact, it reflects a concern that the citizens be able to limit the charter and privileges of government.  Even leftists agree that there are things the government shouldn’t do.  To say that government ought to be prohibited entirely from doing certain things is hardly an extremist proposition.  It’s shared by almost everyone.

If we grant that premise, then the people do, in fact, have an inherent right to regard some government activities as illegitimate – even if those activities have been undertaken by democratically elected politicians.

The issue isn’t whether the people are allowed to question government’s legitimacy.  The issue is what their standing is to hold the government to its appointed limits.

Ideally, the processes of American government – elections, separation of powers, checks and balances, the difficult process for amending the Constitution – keep government within the bounds of legitimacy.

The philosophy of liberty

But if the day should come when they don’t, as it has with every government the earth has ever seen, the philosophy of liberty outlined in the Declaration of Independence says that the human being has a right to oppose even “duly constituted” government, if it is behaving illegitimately.

The signers of the Declaration acknowledged their obligation to lay out where they saw illegitimacy in the king’s activities, and it is perfectly proper for critics to demand an accounting in that regard.

Must the individual man, however, be condemned by a condition of disarmed helplessness to see himself crushed and destroyed in the process of opposing the government?  The philosophy of liberty says no.  The rights of the man are more fundamental than the charter of the state; the latter was created by and for the former, not vice versa.

Trying to foment unreasoning fear about this proposition, which was inherent in the founding of America, is an attempt to stifle freedom of thought (as well as to distort history).  Americans should of course be able to talk freely about the deterrent role of the armed citizen in his relations with the state.

It’s not inherently insurrectionist to discuss the principle of an armed citizenry.  The discussion does inherently presume that government should have enforceable limits on it, and that the role of enforcer belongs ultimately with the people.

America’s Founders said and believed as much.  It may be legitimate to debate their meaning, and the implications of their principles for specific circumstances.  But what’s illegitimate is to frame the proposition prejudicially, as if it makes one a “nut” to say what the Founders said, and as if alluding to the principle of deterrence is the same as encouraging lawless aggression.

Joni Ernst spoke in 2012 in consonance with the American principles of liberty, the armed citizen, and limited government.  I suspect that on the whole, Americans aren’t as convinced otherwise as the left-wing media prefer to assume.  But don’t leave that to chance.  Brush up your own thinking on this topic, and be prepared to make the case for liberty.  Let’s hope, in the coming days, to see Joni Ernst leading the way.