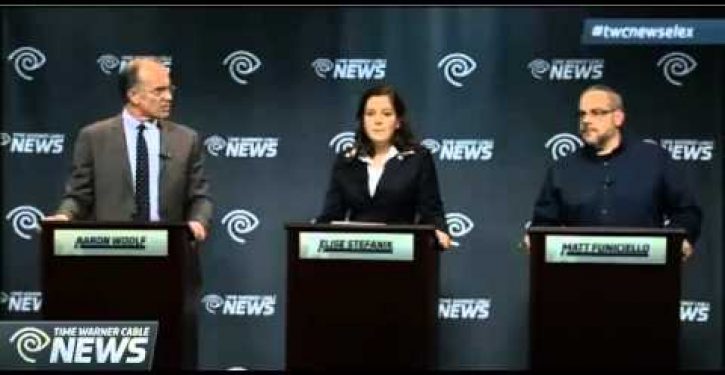 Democratic Congressional candidate Aaron Woolf (NY-21), actively campaigning on a platform of raising the minimum wage, admitted during a debate that he pays employees at his Brooklyn eatery less than the living wage.

During a segment in which his Republican opponent Elise Stefanik was allowed to ask a question, Woolf said he paid his workers an amount less than the legal minimum wage in New York City.

Woolf: It’s $8 in New York State, and the workers that I pay at the grocery store in Brooklyn get $10 an hour.

The mayor [Bill de Blasio] did sign an executive order raising the minimum wage for some workers, primarily those dealing with government contracts. The $11.90 figure is the “living wage” set by the city for those same workers.

A New York Times article states that the executive order basically amounts to a special city minimum wage that applies to cut contractors and fast food/retail workers.  In essence, Woolf is paying his employees less than what McDonald’s workers get paid to start.

Woolf’s campaign is touting support for a raise the minimum wage petition, in which he states, “More money in workers’ pockets means more spending in our small businesses.”

Just not his workers.

It’s also important to note that the “higher wages” candidate and his Brooklyn Eatery, Urban Rustic, were deemed “liable to some extent for the wage violations” against employees during a 2010 lawsuit.