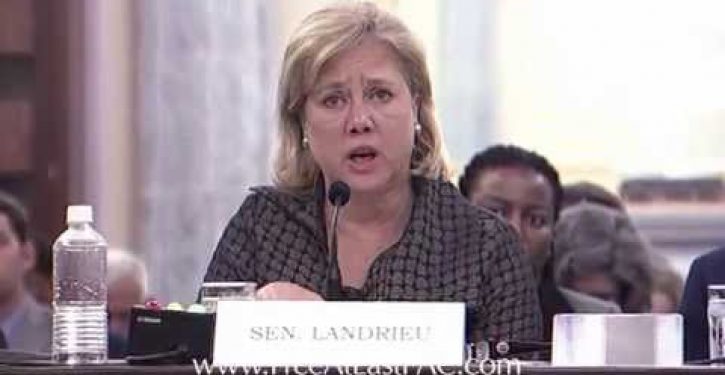 Elbert Guillory and the Free At Last PAC have released a new ad that obliterates Senator Mary Landrieu’s (D-La.) standing in the black community.

You are not Mary’s cause and you are certainly not her charity. You are just a vote – nothing less, nothing more. You are just a means to an end, so that she remains in power.

Guillory, a black Republican Senator, tells viewers that Landrieu lives in a “$2 million mansion on Capitol Hill” and is sipping “champagne at cocktail parties” while members of the black community “dig through the couch looking for gas money.”

He starts by explaining that Landrieu first ran in 1996, “promising to be a champion for the black community.” Since then, little has changed, according to Guillory.

The economic and social climate of Guillory’s home town of Opelousas, La., have steadily declined since 1996.

“Our jails are filled with young black men who should be at home being fathers,” he states.

He finishes by saying, “Mary hasn’t helped us at all.”

“So on November 4th, lets send her back home to her father’s house, or to her mansion in Washington, D.C., or wherever the heck she lives.”

Watch the powerful and provocative ad below:

Cartoon of the Day: Home, sweet home
Next Post
Soccer fans in Morocco cheer for ISIS