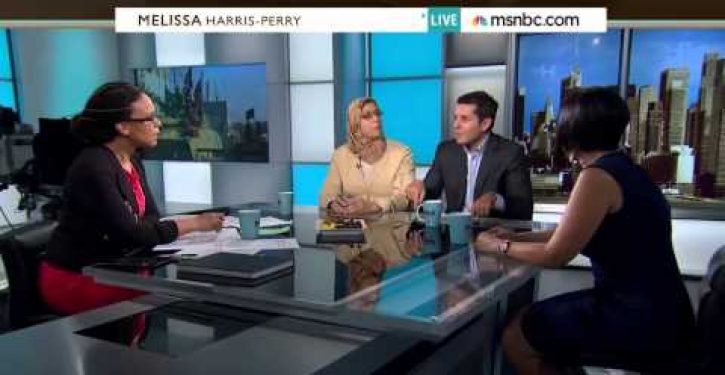 An item posted by Howard Portnoy three days ago took MSNBC’s Melissa Harris-Perry to task for calling Alton Nolen (aka Jah’Keem Yisrael) a “gentleman” and dismissing his barbarous act on a former coworker, whom he beheaded, as “workplace violence.” Yet, by focusing exclusively on Harris-Perry’s ravings and ignoring her guest panel, Howard left some quality material on the cutting room floor.

Among those guests were “comedians” Negin Farsad and Dean Obeidallah, who offered up some noteworthy gems of their own. At around the 1:31 mark in the video, which I’ve reposted below, Farsad notes that “we” (obviously meaning liberals) “need a counter-narrative” to the view (obviously confined to conservatives) that Muslims commit particularly bloodthirsty crimes — such as beheadings. The solution? She suggests the new “stereotype that “Muslims are funny. Muslims are hilarious.”

Funny and hilarious are not words that come to most people’s minds when the topic is a beheading — but then again most people aren’t MSNBC panelists, who make imbecilic statements like this as form of self-denial.

Dean Obeidallah is, and earlier in the clip he demonstrates a different sort of denial by actually stating that when he hears a story like the one in Oklahoma, he thinks, “Please don’t let them be Muslim.”

The unspoken wish in Obeidallah’s sentiment is “Please do let them be white and/or conservative.” We saw an example of this perverse wishful thinking in the Trayvon Martin case, in the media characterization of George Zimmerman as a “white Hispanic.”

We saw it again on MSNBC on several previous occasions. Newsbusters has a good compilation:

Convicted cop killer and former Black Panther to give college address
Next Post
Cartoon of the Day: Claptrap