In politics, the associations and relationships one has usually have an effect on your work, or whether or not you’ll be able to continue working. So when a report came out yesterday that a senior aide to New York Mayor Bill de Blasio was dating a convicted killer, drug dealer, and man who likes to refer to police as “pigs,” one had to believe that aide’s days in the administration were numbered.

Not so, says De Blasio, who shrugged off his aide’s boyfriend’s criminal record by saying he has “full faith” in her and that they share similar goals and values.

First, the report via DNAinfo:

A senior adviser to Mayor Bill de Blasio is in a serious relationship with a convicted killer and interstate drug trafficker whose most recent run-in with the law happened late last year — when he nearly ran over a New Jersey police officer while driving her car, records show.

Rachel Noerdlinger, the chief of staff to first lady Chirlane McCray who has attended top-level NYPD meetings, has been romantically linked to Hassaun McFarlan since 2010. Court and police records show that the two have lived together for nearly two years.

McFarlan, 36, has been arrested at least five times, including for the fatal shooting of a teenager over a down jacket, records show.

Two of the arrests occurred while he was dating Noerdlinger, a former aide to the Rev. Al Sharpton. While they’ve been an item, McFarlan has also trashed police officers on his Facebook account, referring to them as “pigs” in two posts.

It should have taken de Blasio roughly three seconds to contact Noerdlinger and let her know she was fired. How can she attend top-level NYPD meetings and then go home to a significant other who tried to run over one a cop?

And yet, the Observer reports that de Blasio gave a full-throated defense of Noerdlinger:

Mayor Bill de Blasio told reporters this afternoon he has “full faith” in Rachel Noerdlinger, his wife’s chief of staff, despite a new report revealing the extensive criminal history of her boyfriend.

DNAinfo reported yesterday that Ms. Noerdlinger, the chief of staff to Chirlane McCray and former top aide to Rev. Al Sharpton, is in a long-term relationship with a man who served time in prison and attacked police on Facebook.

“I have full faith in her. I know what I value and she values the same things,” Mr. de Blasio said as he left City Hall this afternoon. “We don’t care what someone’s boyfriend says, we care what the public servant is about, as she is very dedicated to working to bring police and community together and that’s what we care about.”

Do you not care that he tried to run down a police officer and killed a teenager over his jacket?

Well, apparently they did yesterday. DNAinfo stated that an official from the mayor’s office stated they would “not tolerate derogatory comments about police.”

One of the Facebook posts from this societal gem read “I cant [sic] come outside without the pigs f—— with me in the hood out the hood im [sic] a magnet to police f—— with me.”

Cartoon of the Day: Justice under Holder has reeked
Next Post
Video: WH doubles down on claim al Qaeda has been decimated 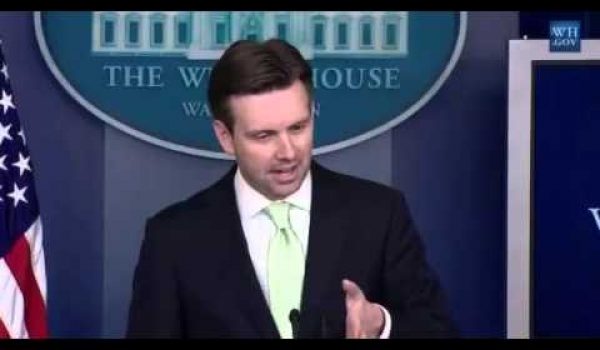