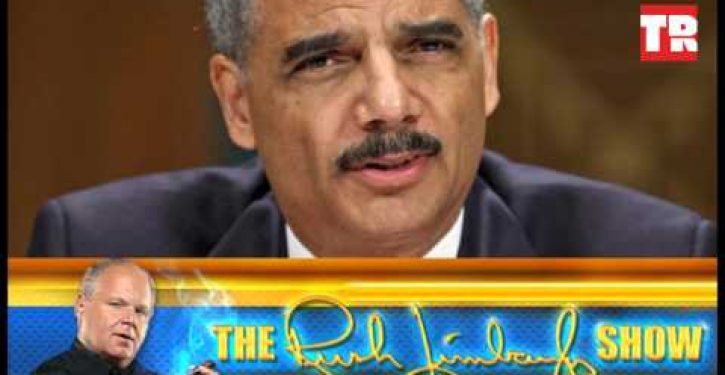 Eric Holder will soon be gone from the Justice Department. But he is not likely to be forgotten if Rush Limbaugh’s greatest fears are realized. The conservative talk radio host suggested on his show Thursday that a Supreme Court appointment may be in the cards for the outgoing Attorney General.

Limbaugh predicted Holder would enter the private sector for a while as a “rainmaker,” doing little actual work save for offering his name on a law firm’s letterhead as a draw for clients. Then, sometime before the Obama presidency has run its course, Limbaugh advanced the theory that the outgoing attorney general may be nominated to the high court.

After his set-up, the popular radio host released this bombshell:

There’s also another possibility regarding Eric Holder, and I just want you to prepare yourself. It may happen.

We still have two years to go. There may be a Supreme Court vacancy, and I can see Barack Obama nominating Eric Holder to fill it. And it would be much easier for Eric Holder to make the jump from private sector law firm rainmaker after six years at the DOJ than from DOJ straight to the Supreme Court. I don’t know how much that would matter, but don’t rule any of that out.

Of course, this is all contingent upon a Supreme Court vacancy within the next two years. The name most frequently advanced for retirement is that of Associate Justice Ruth Bader Ginsburg, 81.

However, Ginsburg has repeatedly said that she has no intention of retiring–not yet anyway.

According to Politico, she told Elle magazine in an interview released earlier this week:

If I resign any time this year, he [President Obama] could not successfully appoint anyone I would like to see in the court.  [A]nybody who thinks that if I step down, Obama could appoint someone like me, they’re misguided.

She later added that she can “do the job full steam.”

There you have it. If Ginsburg leaves, it’ll be either on a slab or kicking and screaming.

Also, it would be difficult at best to get the Senate–even in its present makeup–to confirm a Holder nomination. He’s arguably the most political and racially polarizing attorney general the country has seen in recent years–perhaps ever.

Listen to Limbaugh’s remarks, via TruthRevolt.