This is a public service announcement.

The Washington Times set off a firestorm this week with an article on the ethnicity and race questions on the Bureau of Alcohol, Tobacco, and Firearms’ Form 4473, which is filled out by gun buyers across America when they buy a gun from a dealer.

The TWT article focuses on the very natural offense felt by gun buyers – Hispanic gun buyers in particular, who are singled out on the form – at having to make such declarations of race and ethnic affinity when they are making a commercial purchase.  And because the race/ethnicity questions were changed on the 4473 in 2012, under Barack Obama, there are at least some people who wonder, not unreasonably, what the Obama administration means by it.

The change made to the form in 2012 requires gun buyers to now declare both an ethnic affinity – “Hispanic or Latino,” or “Not Hispanic or Latino” – and a race.  Customers don’t have the option of leaving either of these choices blank.  The gun dealer is liable to the ATF for the completeness of the forms, and could lose his license if they’re not filled out entirely.

TWT reports correctly that this change was driven by a 1990s-era federal policy change made by the Office of Management and Budget.  The policy change governs how race/ethnicity information is collected by federal agencies, and its intent was to streamline the collection standard across the federal government.  Every agency that collected such information would collect it the same way.

The change was supposed to be implemented throughout the federal government by 2003.  Maybe there’s something to the point that the ATF hadn’t changed its 4473 by then, but only got around to it nine years later, in 2012.  Maybe this bureaucratic change was finally enforced because of an Obama administration agenda.  TWT points out the Holder Justice Department’s shenanigans with Fast & Furious, and the general propensity of the administration to use federal bureaucracies against the people.

But on a less speculative level, the change in the 4473, and the absurdities it has created – e.g., Hispanics having to decide if they’re white, black, Asian-Pacific Islanders, etc. just because they want to buy a gun – is a wonderful teaching tool about how bureaucratic purposes metastasize.

The key facts are these.  First, gun buyers have had to declare a race on the Form 4473 since the late 1960s.  The record-keeping for firearms transactions is prescribed in 27 CFR 178.124, which incorporates the statute originally created in December 1968, and has been amended on a number of occasions since (see page. 1184 at the link for the list of revisions).  The race question on the Form 4473 comes from this provision in the statute (subparagraph (c)(1) on p. 1182; emphasis added):

The requirement to declare race on the form was clearly intended originally for visual identification purposes, as it was included with height and weight.  The statute was written years before we had computerized, interlinked law-enforcement databases, scannable driver’s licenses and other photo IDs, computer-enabled fingerprinting, and so forth.

But during the last 20 years, when technology has made it quite feasible for a gun buyer to establish his identity and bona fides by handing over an ID rather than filling out blocks on a form, we have had no meaningful, government-limiting reform of our federal bureaucracy.  There has been no impetus for that in national politics.  The American people have been content for the federal bureaucracy to mushroom, largely on its own say-so.

Ironically, meanwhile, it was the famous Bill Clinton-Al Gore effort to “reinvent government,” beginning in 1993, which produced the next step in today’s race/ethnicity-intrusive ATF Form 4473.  Vice President Gore was assigned to reinvent government – reform the federal bureaucracy – but, of course, he was the vice president in a Democratic administration. The Clinton administration had no intention of reducing the scope of government.  That wasn’t the point.

The point, rather, was to accomplish exactly such “streamlining” measures as requiring all federal agencies to collect race information in the same way.  If race information was already being collected from the people, that data stream certainly wasn’t going to stop.

And so it came about that in 1997, the Office of Management and Budget promulgated new rules for collecting race and ethnicity information.  The notice in the Federal Register from 30 October 1997 is here.  OMB describes its process thus:

In response to [criticisms about how race/ethnicity information was collected on federal forms], OMB announced in July 1993 that it would undertake a comprehensive review of the current categories for data on race and ethnicity.

This review has been conducted over the last four years in collaboration with the Interagency Committee for the Review of the Racial and Ethnic Standards, which OMB established in March 1994 to facilitate the participation of Federal agencies in the review.

I’m betting you didn’t know there was an Interagency Committee for the Review of the Racial and Ethnic Standards.

In any case, the form changes required after this interagency review are a real “thing.”  Federal forms were all supposed to be in compliance with the 1997 guidelines by 1 January 2003.  The relevant passage governing the change on the Form 4473, in case you don’t want to read the whole scintillating federal notice, are subparagraphs (2) and (3) on p. 58786 of the Federal Register (which is p. 5 of the PDF document.  Look to the right).

Now, as TWT notes, the Form 4473 doesn’t really “collect” race or ethnicity information for the same purposes as federal forms like the Census form or the HUD form for FHA mortgages.  The 4473 was never intended to create a demographic profile of gun ownership among the people.  Requiring a declaration of race was intended originally as a basis for visual identification of the gun buyer, back in the days when there was no such thing as a computerized, government-issued photo ID.

But that’s the beauty of metastasizing bureaucracies.  They’re too vast and self-perpetuating to be easily reined in.  Their original purposes just shift over time, while their practices are never terminated.

I suspect that the ATF didn’t make the OMB-directed change to its form back before 2003 precisely because someone in the bureaucracy recognized that the principle of OMB’s new race/ethnicity requirement was not applicable to the purchase of firearms.  (I would argue, in fact, that it is applicable to just about nothing the federal government should properly be doing.)

But the existence of the bureaucracies leaves us at the mercy of the mindset and philosophy of unelected bureaucrats.  Once Obama took office, it was only a matter of time before someone else in a bureaucratic position decided that the feds should most definitely collect race/ethnicity information from gun buyers, as if gun buyers were being profiled.

And please get this, if you get nothing else out of this teachable moment.  It didn’t take a nefarious breach of statutory law or duly promulgated regulation for the federal bureaucracy under Obama to make this subtle shift, from identifying gun buyers to profiling them.  All the required pieces were already in place, having been created through due process of law, by mainstream Democrats and Republicans, over the previous 44 years.

Government is never a benign entity that can be left to its own devices.  It always leads to this, if it is not being deliberately reined in, and it always will.

Picture of the Day: Dem wants monument to climate change on National Mall; so do I
Next Post
Clinton State Dept. invented new term to sidestep security standards at Benghazi 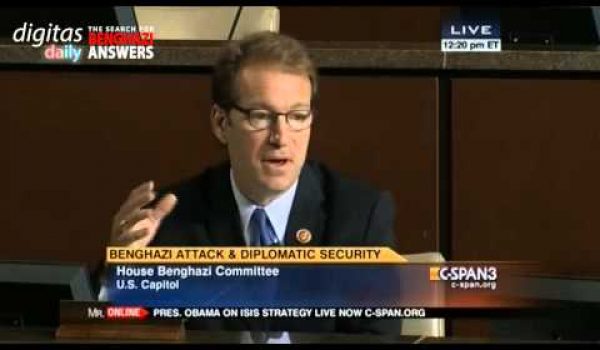