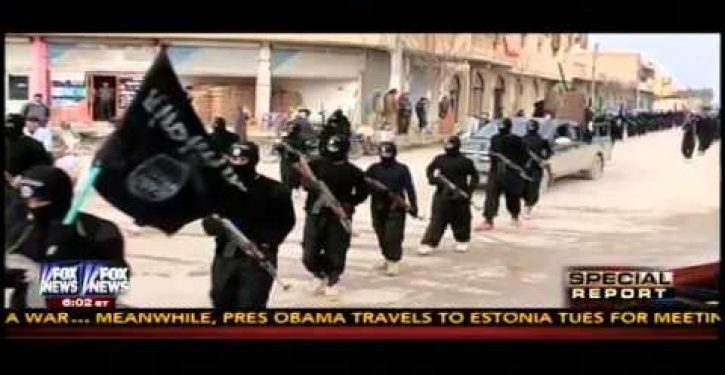 A former Pentagon official told Fox News that President Barack Obama had been kept continuously informed about the meteoric rise of the Islamic State, or ISIS, for at least a year through his daily briefings. Yet he referred to the terrorist group as “JV” in January, and claimed last month he had “no strategy” for dealing with the threat.

“I am not suggesting being President is easy (it is not), Greta Van Susteren wrote on GretaWire. “But I am stunned that President Obama would call ISIS jayvee last January if he had information about ISIS more than a year ago.”

The Pentagon official, unnamed due to the sensitivity of his disclosure, said the the information contained within the President’s Daily Briefs, or PDBs, was so “granular” in detail that the president “…could not come away with any other impression: This is getting bad,” Fox News Chief Intelligence Correspondent Catherine Herridge reported.

According to Herridge’s Fox News report:

After suggestions that the administration may have been blindsided by the rise of ISIS, and that poor intelligence was to blame, the former Pentagon official said some of the intelligence was so good it was described as “exquisite” when the President drew a red line on chemical weapons use in Syria in 2012.

The source went on to say that the White House never issued strike orders, although “[we] were ready to fire, on a moments notice, on a couple hundred targets.”

Referring to a result of the president’s excessive caution, Fox News continued:

On whether the administration delayed acting on the Foley rescue, as first reported by the Sunday Times of London to be 30 days, the former Pentagon official confirmed there was significant delay, describing a White House that was racked with “hesitancy” and continually asking for “the intelligence to build up more.”

At the time, Fox News is told that a large, heavily armed compound, believed to be housing Foley, and other potential captives, was identified near the ISIS strong hold of Raqaa, Syria.

John Bolton, former U.S. Ambassador to the U.N., appeared “On The Record” later Tuesday and told Fox host Greta Van Susteren that it’s quite possible that the president “wasn’t paying attention” to the PDBs “because I just don’t think he is that interested in American national security–I don’t think it’s a priority for him.”

Obama’s “view of the world,” according to Bolton, is that “terrorism is not a threat,.”

Quoting Secretary of State John Kerry, he said that this mindset–that terrorism is “a localized matter”–runs throughout the Democratic Party.

Watch the exchange, via NewsToExpress.

Van Susteren wondered later that evening how Obama stacks up against Britain’s prime minister, according to Twitchy:

How do you compare & contrast the differences between the British PM @David_Cameron & U.S. President @BarackObama in response to #ISIS?

Pocket Liberty Editor in Chief Jay Caruso was only too happy to provide a graphic answer.

How do you compare & contrast the differences between the British PM @David_Cameron & U.S. President @BarackObama in response to #ISIS?

Check out more tweets on the subject at Twitchy.