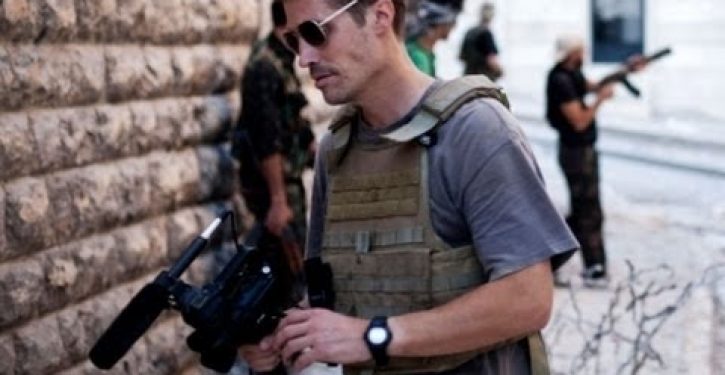 President Barack Obama vacillated Hamlet-like for nearly a month before finally approving an operation to rescue hostages in Syria — including photojournalist James Foley — according to a report from The Sunday Times.

Shortly after Foley’s gruesome execution was recorded on video and published on YouTube, the Obama administration issued a “we tried” statement, acknowledging that U.S. special forced attempted a rescue on July 4.

The administration was sternly criticized for revealing too many details of the failed mission, putting future hostage rescues in jeopardy.

But what was not widely known until Sunday is that during the delay in getting the president’s approval,”Pentagon sources said Foley and the others might well have been rescued but Obama, concerned about the ramifications of US troops being killed or captured in Syria, took too long to authorise the mission,” The Sunday Times reported.

Instead of Hamlet’s “To be, or not to be,” it was “To go or not to go” that was the question. Obama was concerned that in the event of mission failure, his image could be tarnished much like former President Jimmy Carter’s was after the failed rescue of embassy employees in Iran.

The Times went on to say, according to Breitbart News:

For President Barack Obama the decision to send in the Night Stalkers was an agonising one. The audacious bin Laden raid in Pakistan had been a success but also preying on his mind was the failed 1980 Delta Force operation to rescue American hostages in Tehran. Sandstorms and mechanical troubles led the mission to be abandoned and eight American troops were killed when two aircraft collided. The debacle cast a shadow over Jimmy Carter’s presidency.

As noted by Breitbart, the date of the eventual raid — July 4 — may have been specifically chosen as “a nice July 4th weekend announcement for Obama had the mission succeeded.” As reported by The Times:

Anthony Shaffer, a former lieutenant-colonel in US military intelligence who worked on covert operations, said: “I’m told it was almost a 30-day delay from when they said they wanted to go to when he finally gave the green light. They were ready to go in June to grab the guy [Foley] and they weren’t permitted.”

During the nearly-30-day period Obama was playing the role of the indecisive Hamlet, he also played six rounds of golf. He played an additional round the day after the mission’s failure.

Watch this video on the failed rescue, via the Associated Press. Immediately after Obama made his statement on Foley’s brutal execution, he played another round of golf.