One of the more fascinating facets of the Democratic Party’s allegation that Donald Trump engaged in a quid pro quo to undermine the chances of a political opponent vying for his job is its potential to cut both ways. If Adam Schiff and company can persuade the American people that the president used the power of his office to coerce an ally into opening an investigation of presidential hopeful Joe Biden and his son, Hunter, the odds on impeaching and removing Trump from office improve. If on the other hand, the target of such an investigation actually engaged in some nefarious dealings, then the Democrats’ ongoing “impeachment” probe may backfire, eliminating from the picture not the president but the party’s current front-runner.

New evidence compiled by investigative reporter John Solomon suggests that Burisma Holdings, the Ukrainian gas company on the board of which Hunter Biden sat, pressured the Obama administration to quash corruption allegations. Solomon’s claim, based on memos obtained via the Freedom of Information Act (FOIA) reveal that the contact with administration higher-ups took place a in February 2016, a month before Vice President Joe Biden forced Ukraine to fire the prosecutor looking into the case.

Just three weeks before Burisma’s overture to State, Ukrainian authorities raided the home of the oligarch who owned the gas firm and employed Hunter Biden, a signal the long-running corruption probe was escalating in the middle of the U.S. presidential election.

Hunter Biden’s name, in fact, was specifically invoked by the Burisma representative as a reason the State Department should help, according to a series of email exchanges among U.S. officials trying to arrange the meeting. The subject line for the email exchanges read simply “Burisma.”

“Per our conversation, Karen Tramontano of Blue Star Strategies requested a meeting to discuss with U/S Novelli USG remarks alleging Burisma (Ukrainian energy company) of corruption,” a Feb. 24, 2016, email between State officials read. “She noted that two high profile U.S. citizens are affiliated with the company (including Hunter Biden as a board member).

“Tramontano would like to talk with U/S Novelli about getting a better understanding of how the U.S. came to the determination that the company is corrupt,” the email added. “According to Tramontano there is no evidence of corruption, has been no hearing or process, and evidence to the contrary has not been considered.”

There is much more worth pondering in Solomon’s report, including his closing summary question: “Did any of those contacts prompt further action or have anything to do with Joe Biden’s conduct in Ukraine in March 2016 when he forced Shokin’s firing?”

Shock poll: Hillary Clinton tie with Biden in hypothetical match-up, leads Trump in general
Next Post
Cartoon of the Day: It’s in the bag 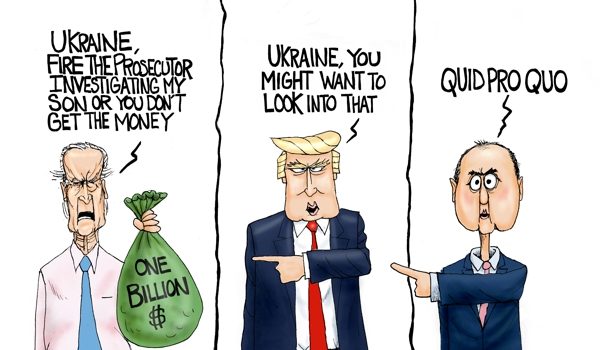