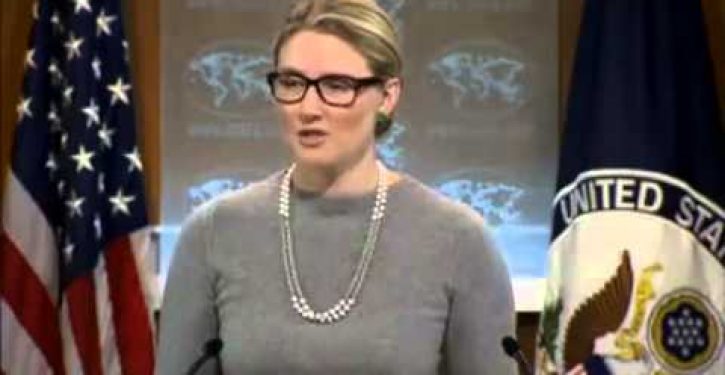 State Department spokeswoman Marie Harf reiterated the Obama administration’s position that the United States is not at war with ISIS/ISIL. Social media reacted much as you might expect — by suggesting employment better suited to Harf’s talents.

At Thursday’s State Department press briefing, a reporter brought up the Islamic State’s declaration of war against the United States.

“I mean, even they [ISIS/ISIL] are announcing … that now we are in a war with America,” he said.

“This is not about ISIL versus the United States,” Harf said, rejecting the idea that a state of war exists. Her logic seemed to be that because the Islamic State is at war with everyone, including “Sunnis, Shia Muslims, Christians, Yazidis, Iraqis, Syrians, anyone who gets in their way — and now an American,” they’re at war with no one.

“But they are announcing that it’s a war against America,” the reporter said, not backing down. “Right or wrong, that’s what they are saying.”

“Well, they can say whatever they’d like, but what I am making clear is that’s not what ISIL represents,” Harf shot back. “And they don’t represent any religion. They are at war with everybody they come into contact with.”

So, is she saying now that they are at war with us?

Watch the video via the Washington Free Beacon.

ISIL: We’re at war w/the US @marieharf: Not really ISIL: Yes, we are @marieharf: You crazy scamps! ISIL: We’ll kill you @marieharf: LOL

When IowaHawk blogger David Burge remarked that Harf’s talents might be better suited elsewhere, another Twitter user, “Independent Patriot,” was afraid others may find it offensive:

@iowahawkblog u r insulting the intelligence of t-shirt folders

Jon Gabriel, Ricochet editor and self-described “undisputed king of stuff,” used his undisputed Photoshop skills to come up with another career move for the State Department spokeswoman:

@exjon I would RT 6 trillion times if I could.

Both Harf and her State Department sidekick, Jen Psaki, are all-too-often called out for making illogical statements. I’m sure that in their personal lives they’re both talented and intelligent women. It’s just that their job forces them to support the Obama administration’s often illogical positions.

Flashack: Cuomo in 2002 said campaigns should be about a good, honest discussion on the issues
Next Post
Cartoon of the Day: Just wrong!