Texas Governor Rick Perry was delivered a crap sandwich Friday in the form of a trumped-up two-count felony indictment. He turned it into a mouthwatering Monte Cristo at his booking Monday, where he was greeted with cheers from supporters and posed for a mug shot fit for a presidential campaign.

He came out swinging almost from the moment he was indicted. He appeared on both Fox News Sunday and CNN’s State of the Union to tell his side of the story. At the same time he had his team put together a two-minute video describing for Texans–and indeed all Americans–what the Texas-sized brouhaha was all about.

Lachian Markay tweeted the Perry video, which was soon picked up by Breitbart Washington, D.C. writer Charlie Spiering. Markay’s “brutal” description pretty much says it all. See for yourself:

@BecketAdams @lachlan BAM FREAKIN’ BAM! Way to GO, Rick Perry!!! #RICKPac I am so beyond sick of the corruption in Traviis Co! BAMMMMMM

But Wilson Perkins Allen Opinion Research pollster Lauren Luxenburg summed up what it was all about with the inclusion of a single hashtag:

Like a boss indeed–exactly the sort of person we want as a president.

Late Monday afternoon came the part Perry fans dreaded the most — the booking procedure. Turning oneself into the local sheriff is the ultimate in bad optics for a politician. Throw in the mugshot and the optics last forever. His supports needn’t have worried.

The governor arrived at the Travis County Courthouse to the cheers of hundred of well-wishers. ABC News political director Rick Klein summed up the scene like this:

Surely the strangest booking of a pol, ever. RT @ArletteSaenz: Perry arrives for his booking with chants of “Perry, Perry, Perry”

Political reporter for TIME Magazine Zeke Miller tweeted Perry’s arrival at the courthouse, then kept a running commentary of the high points of his statement. His theme was the rule of law, the same message of his Sunday talk show appearances and the video.

Perry has arrived at Travis County Courthouse. Making a statement

Miller’s tweets continued, according to Twitchy:

“Perry: I am here today because I believe in the rule of law.”

“Perry: If I had to do so, I would veto funding for the public integrity unit again.”

“Perry: I am going to enter the courthouse with my head held high knowing the actions I took were not only lawful and legal, but also right.”

“Perry: I will no allow this attack on our system of government to stand.”

Texas Gov. Rick Perry: “I’m going to fight this injustice with every fiber of my being and we will prevail.”

Gov. #Perry emerges after getting mugshot and fingerprints taken pic.twitter.com/qr4GMvuk8s

But what of the mugshot? Kathleen McKinley, political blogger for The Houston Chronicle and Newsbusters opined:

@BretBaier presidential he should use this on his campaign posters, this indictment is a disgrace and a misuse of our criminal legal system

Sounds like a winner! Be sure to read the other opinions by going to Twitchy. 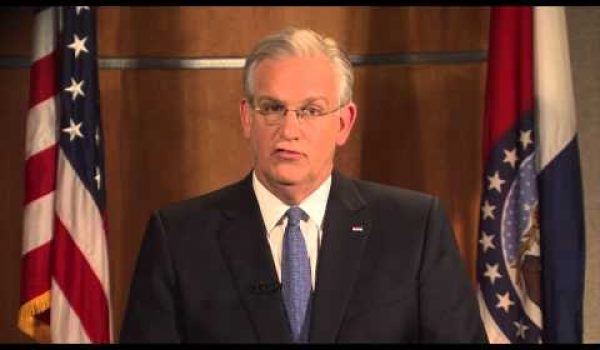