I guess we’re all using the caveats “reportedly” and “allegedly” about this because there’s no body to identify.  There probably never will be.  ISIS has posted a video, however, which is frankly too gruesome for me to embed here.  It won’t be hard for you to find.

And I’m with Katie Pavlich of Townhall: I’m not going to gratify ISIS by amplifying the effect of their video.  We know what they can do to a helpless, unarmed captive.  We don’t have to see it.

The journalist is James Wright Foley, 40, an independent journalist from Rochester, NH who was working for Agence France Press when he was captured in Binesh, Syria on 22 November 2012.  At the time of capture, it wasn’t clear which group had seized him.  The FBI referred to the group only as “an organized gang.”  Foley has been held ever since, and was either in ISIS’s clutches the whole time, or was turned over to them at some point in the last two years.

Foley was no stranger to captivity in the Arab-speaking world.  In 2011, he was working for the news site GlobalPost in Libya when he was captured by Qadhafi’s soldiers and held for 44 days.  His fellow journalist, photographer Anton Hammerl, was killed when his group came under fire just before being captured.

Foley’s translator in Syria was taken captive with him in November 2012, but released shortly afterward.

ISIS required him to recite an indictment of America before his beheading, including this line:

The UK Mail Online provides a transcript of the full recitation:

I call on my friends family and loved ones to rise up against my real killers, the US government. For what will happen to me is only a result of their complacency and criminality.

My message to my beloved parents: save me some dignity and don’t accept any (unclear, possibly says media) compensation for my death, from the same people who effectively hit the last nail in my coffin with a recent aerial campaign in Iraq.

I call on my brother John, who is/was (this part is also unclear) member of the US Air Force, think about what you are doing, think about lives you destroy including those of your own family.

I call on you John, think about who made the decision to bomb Iraq recently and kill those people, whoever they may have been.

Think John, who did they really kill? Did they think about me, you our family when they made that decision?

I died that day John, when your colleagues dropped that bomb on those people – they signed my death certificate.

I wish I had more time, I wish I could have the hope of freedom and see my family once again, but that ship has sailed. I guess all in all, I wish I wasn’t American.

I doubt I have to make the observation that he has been under duress for nearly two years at this point, and should be remembered for the man he was and work he did.  There will no doubt be more suitable memorials for him in the coming days.  For now, our hearts must go out to his family and friends.

The ISIS thug in the video with him speaks in English and appears to have a British accent.  At the end of the video, a second man is shown, wearing an orange shirt.  The ISIS speaker issues the following warning:

The life of this American citizen, Obama, depends on your next decision.

IS: “The life of this American citizen, Obama, depends on your next decision” pic.twitter.com/tFZyBGN9YN

Numerous Tweeps have identified the second captive as Steven Joel Sotloff, a reporter for TIME.  The last report from him on the TIME website is from 26 November 2012; Twitter user Zaid Benjamin says Sotloff hasn’t tweeted since mid-2013.

Steven Sotloff is believed to be a journalist with TIME magazine who covered #Egypt. He didn’t tweet since mid 2013. pic.twitter.com/UUnXw6eeu1

Khalid Alakoozi Tweets that Sotloff was taken captive in August 2013:

Steven Sotloff was kidnapped near Aleppo on August 4th 2013. Family was following advice not to go public – Held in Raqqa.

Sadly, my last prediction about ISIS shifting to the exploitation of hostages as a means of trying to get at America has come true very rapidly.  Barack Obama has been utterly inadequate so far to a task like dealing with these monsters from hell.  It is extremely unlikely that anything wise, useful, or statesmanlike will be done about them in the coming days.

But the option exists right now to do better than what Obama will do.  His limitations do not bound the scope of possibility, and we must not forget that as the days crawl by and it feels like we are staked to an anthill in the burning sun.  As dire as our situation is, with our economy tanking, our alliances fraying, and our military overstretched and underfunded, we have options.  Even if we don’t have a president who could or will navigate them, we must bear up to the task of facing reality and expounding vision.  There is no screen that will go blank for us; no “Game over” beyond which we have no existence.  Tomorrow will just keep coming.  We’re it: we’re the ones here.  It’s on us.

*UPDATE*:  This update just heard on Fox News (Megyn Kelly’s show) is worth appending.  According to the always-reliable Catherine Herridge, U.S. intelligence officials think ISIS probably has at least two additional American hostages, and not just one, who would be under imminent threat right now.  Herridge did not name anyone beyond Steven Sotloff. 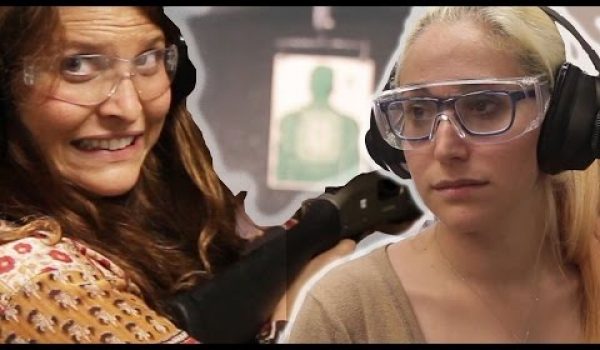 What do you get when you mix five anti-gun liberals with a gun range? (Video)
Next Post
Bam! Perry comes out swinging #LikeABoss, turns mug shot into glamor shot (Video)