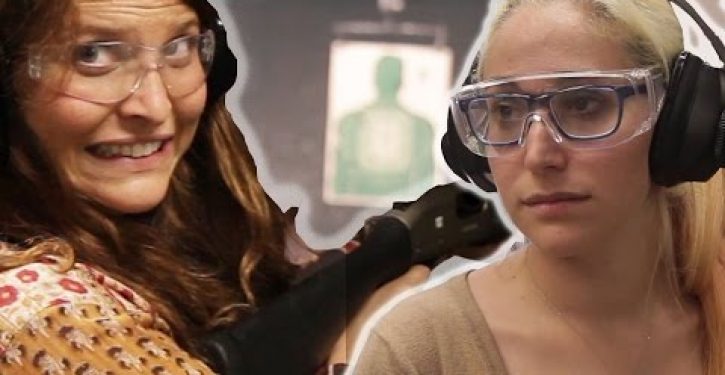 Just for the fun of it, BuzzFeed took five diehard anti-gun liberals to the Los Angeles Gun Club to let them shoot a gun for the first time in their lives. The result was sometimes instructive, others hilarious, and at one point a bit scary.

Before entering the range, BuzzFeed asked each participant for his opinion on gun ownership.

“I don’t think there’s any reason to have guns in America,” said Hillary.

“I think we should have stricter rules on guns,” said a Daysha.

“Maybe the right to bear arms was something that was necessary at the time,” said Allison on the Second Amendment. “It’s just an antiquated thing.”

They started out fairly easy — a 9mm Beretta handgun.

“Just shooting once — that took a lot out of me,” Gaby reported. “I fired once and I wanted to take a nap.”

Later they received instruction in a pump-action shotgun.

“I felt kind of badass,” Abe, the sole male in the group said about chambering rounds into the gun while ejecting the spent shells.

After shooting a round and pumping a fresh one, Allison turned around with a huge grin on her face — and brought the gun around with her in the general direction of her trainer. Oops.

From the looks on their faces, they all seemed to enjoy the outing. Nonetheless, it didn’t change their opinion of guns–except for one who admitted the experience was a rush.

“It’s an adrenaline rush,” she said. “Even though it’s fu**ed up and I feel confused and conflicted about it all, I would probably come back and do it again.”

That person was Allison — the one who was careless about where she pointed the shotgun.