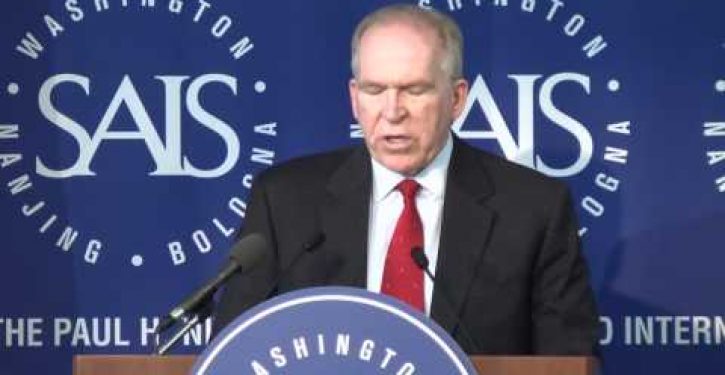 Hindsight and all that. The Weekly Standard notes that embattled CIA director John Brennan in a previous life was a senior adviser to the president, in which capacity he said:

Our strategy is…shaped by a deeper understanding of al Qaeda’s goals, strategy, and tactics,. I’m not talking about al Qaeda’s grandiose vision of global domination through a violent Islamic caliphate. That vision is absurd, and we are not going to organize our counterterrorism policies against a feckless delusion that is never going to happen. We are not going to elevate these thugs and their murderous aspirations into something larger than they are.

That statement, captured in the video below, was made on June 29, 2011, by way of explaining the administration’s counterterrorism strategy.

On June 29, 2014, rhree years later to the day, the Islamic State of Iraq and the Levant (ISIL) announced that it now ruled large swaths of Iraq and Syria as a caliphate. The Weekly Standard’s Thomas Jocelyn writes:

ISIL, which grew out of al Qaeda in Iraq before eventually being disowned by al Qaeda’s senior leadership, changed its name to simply the “Islamic State.” And the group’s leader, Abu Bakr al Baghdadi, is now known as “Caliph Ibrahim.”

Mass killings and mayhem follow the Islamic State wherever it goes. They are still marauding through Iraq — two months after their current campaign began in early June.