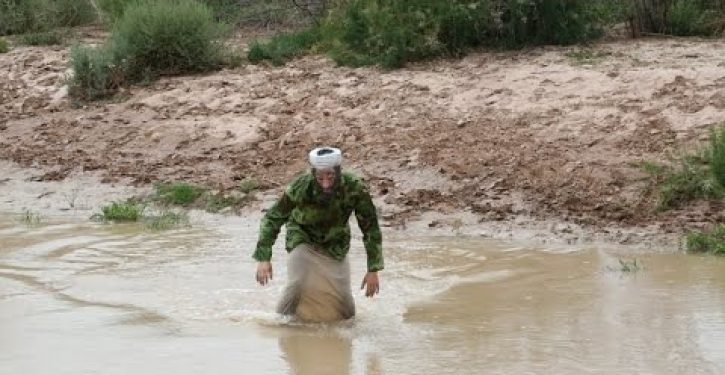 James O’Keefe II, the conservative political activist who first came to the public eye by exposing shenanigans at ACORN, has turned his attention to the crisis at the southern border and asks, “Could Osama bin Laden have made it across?”

O’Keefe examined the border along West Texas, where a narrow, shallow stretch of the Rio Grande is all that separates the United States from Mexico, as Liberty Unyielding reported Monday. Project Veritas noted what was Perhaps the most dramatic discovery:

Dressed in the trademark military jacket and dishdasha and donning an Osama bin Laden mask, O’Keefe asks, “Do you feel safe” before stepping into the Rio Grande and easily walking across the border into the United States.

The investigation took place in Hudspeth County, Texas, at a crossing commonly used by illegal immigrants and drug smugglers. In less than one minute, O’Keefe crossed the river, which is only 2-3 feet deep and 20 feet wide in that area. The crossing is outside of Fort Hancock, Texas and only six miles from Interstate 10 on the American side. On the Mexican side, an access road comes within 100 feet of the river. Footprints, recent campsites, litter and well-worn paths mark both sides of the river where O’Keefe crossed.

O’Keefe was not confronted by a single member of U.S. Customs and Border Protection.

“If the President or Senator Reid or anyone else tries to tell you that our borders are secure, they are lying to you,” Okeefe asked. “Border security is national security. We were able to pick a well-traveled crossing, easily accessible from both sides, and cross unobserved by federal agents. Just six miles from our crossing is Interstate 10, and from there, the rest of the country. Do you feel safe?”

O;Keefe isn’t the first to realize that it’s not just Central and South Americans making the trek across the U.SA.-Mexican border.

South Texas Rancher Michael Vickers discovered an Urdu-to-English dictionary and phrase book on his land. Urdo is the official language of Pakistan, and is also spoken in parts of Afghanistan and India, as reported previously in Liberty Unyielding.

Watch the video report below, via Project Veritas: