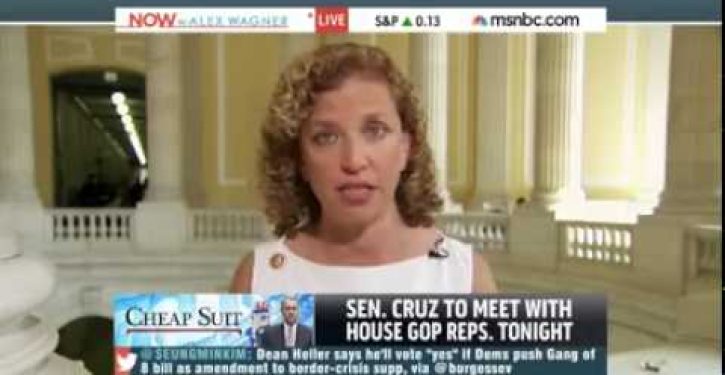 U.S. Rep. Debbie Wasserman Schultz, D-Fla., made a claim Wednesday that has many conservatives cheering. She stated on national TV that President Obama does his job “less often and at a rate that is lower than any other president since Grover Cleveland.”

Given the president’s decision this week to embark on a three-week Martha’s Vineyard holiday in the midst of intense border turmoil and international crises, I agree 100 percent. But I’m sure that’s not the way she intended her words to come out.

The lawmaker and Democratic National Committee chairwoman appeared on MSNBC shortly before a floor vote to authorize House Speaker John Boehner, R-Ohio, to initiate a lawsuit against the president. She said:

I’m going to go to the House floor and actually debate why we shouldn’t be voting for the first time in American history to sue the President of the United States for doing his job. And doing his job actually less often and at a rate that is lower than any other president since Grover Cleveland.

Hey, she said it.

Watch her remarks in this clip provided by the National Republican Congressional Committee.

Prominent Dems agree Cuomo broke laws by interfering with his own ethics panel
Next Post
‘Stop all the hatin’,’ urges the president … as he mocks GOP