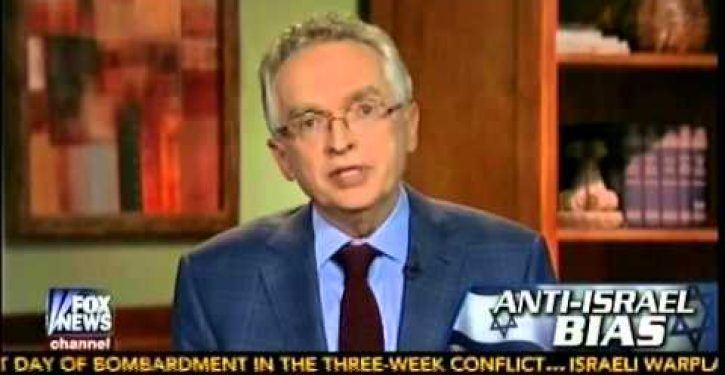 During her Sunday appearance on CNN’s “State of the Union,” Pelosi revealed to host Candy Crowley that according to Qatar, Hamas is a humanitarian organization.

Peters sarcastically replied that Hamas is without question humanitarian, “in the fine tradition of other humanitarian organizations such as the Nazis and the Black Hundreds.”

He also noted that Qatar is hardly a government to seek advice from — it’s a major funder of terror throughout the Middle East.

Peters then addressed Clinton’s suggestion to journalist Jorge Ramos Monday that the reason Hamas stores their weapons, including rockets, in schools and hospitals is that Gaza is small and densely populated.

He observed that Clinton couldn’t have learned very much during her tenure as secretary of state.

“Hillary Clinton, her naiveté, the ignorance should disqualify her from being anything more than a small town mayor, I suppose,” he said.

Neither the Pelosi comment, nor that from Clinton, escaped the attention of Twitter users. David Horowitz, of the Los Angeles-based David Horowitz Freedom Foundation didn’t hold back an inch.

And popular conservative actor James Woods had this to say about Clinton:

Hillary Clinton is nuttier than Nancy Pelosi, and Pelosi is the gold standard of nuts. pic.twitter.com/8QhQoznUBH

The late humorist Will Rogers once quipped, “If you find yourself in a hole, stop digging.” Pelosi and Clinton would do well to take that advice.

Despite anti-Israel protests worldwide, Palestinians have a long history of terrorism
Next Post
Where’s the beef? USDA planning new food pyramid to include only fruits, plants, dairy