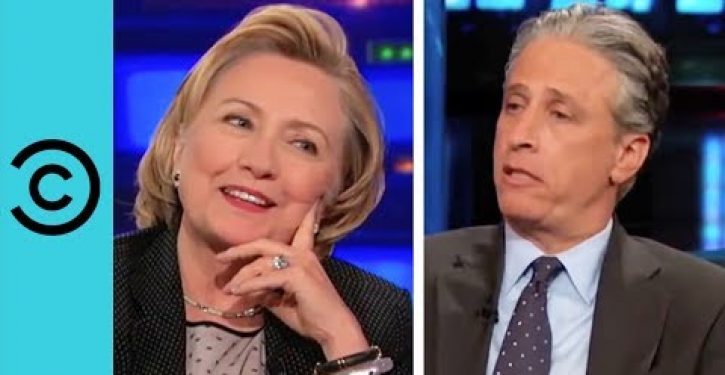 In case you missed it last night, the left’s favorite comedic whore, Jon Stewart, had on as a guest the once-invincible but now-floundering presumptive Democratic 2016 presidential candidate Hillary Clinton. Not surprisingly, the question were all big mushy softballs, but feel free to judge for yourself. A video of the segment appears at the end of this post.

Since the left will obviously continue to attempt to prop up and breathe new life into a Clinton candidacy, it seems incumbent on us to post occasional reminders of what got the former Secretary of State/First Lady into trouble in the first place. So, on the heels of her recent claim that she left the White House “dead broke,” consider the fee sher received for speaking at the University of Buffalo:

The State University of New York in Buffalo paid Hillary Clinton $275,000 for a speech last year and had to agree to a long list of demands that included approval of the moderator and stage set, according to the nine-page contract made public Wednesday.

The university — which had been refusing to disclose terms of the deal — caved in after a good-government group called the Public Accountability Initiative filed a Freedom of Information request.

The payment was higher than Clinton’s lowest speaking fee of $200,000 and raised eyebrows, even though the university said it was paid by its foundation, not taxpayer dollars.

Steve Brown, an investigative reporter for WGRZ explained earlier this month that when he contacted the University at Buffalo they said “we’re not going to discuss it.”

Brown elaborated by explaining that those university students who are facing tuition increases typically vote Democrat, and those increases likely do not sit well while Clinton collects a six-figure paycheck from their school for one speech.

What may be more of an optical detriment is the list of demands. A list that included a mandatory “presidential glass teleprompter and qualified operator,” among other things:

The university had to provide 20 priority seats for her guests and staff, a $1,000 fee for a stenographer to provide a transcript that only Clinton would get, approval of the moderator, a limit of 50 photos totaling 100 people with VIP guests and limited advance advertising.

Clinton has been making top dollar on a speaking tour at eight different universities in the past year. Those universities willing to disclose payments to the former First Lady, have them ranging between $225,000 and $300,000. According to Mail Online, Clinton’s speaking fees for two recent university engagements averaged $2,777 per minute.