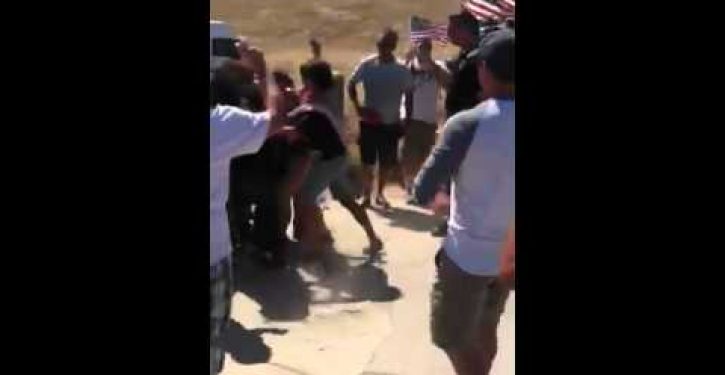 Renee Nal reported earlier today on the first arrest made at the Murrieta, CA protest site, where citizens are demonstrating for and against the impending arrival of hundreds of illegal immigrants escorted by the U.S. Border Patrol.

That arrest involved a protester who refused to get out of the road when ordered to by Murrieta police.  The police were clearing the road at the time, arranging the area so that protesters are cordoned off behind police tape.  Although it can be argued – superficially – that the purpose of this is public safety, the road is closed to normal traffic already, so the presence of pedestrians in it doesn’t actually pose a safety hazard.  The road was obviously being cleared to prevent a recurrence of Tuesday’s road blockage by the protesters against the illegal influx.

So it’s fair to say, as David Wohl did on Twitter (see Renee’s post), that the man was arrested “while clearing the way for and assisting illegal aliens.”

There have been five more arrests since the first one.  All five were made at the same time, when a group of pro-illegal protesters walked over to the other side of the demonstration – police have the sides separated now – and began taunting the pro-secure borders protesters.  One of the women among the pro-illegals group physically attacked an opposing protester.  The police descended on them immediately, and in the ensuing scuffle, a pro-illegal protester jumped on a policeman’s back.  Five pro-illegal protesters were arrested.  (Raw video of part of the incident below.)

Notably, police declined to say which side the arrested protesters were from, and the local news affiliates have been silent on that matter as well.  There are local news crews on site, however, and they are bound to know who the arrested protesters were.  They showed the man (Larry Spencer) who was arrested this morning on screen, but have not aired footage on the local news broadcasts of the pro-illegal protesters who were arrested later.  When I first saw the report of the multiple arrests, I suspected that the individuals were probably pro-illegal protesters, because no one was saying who they were.  That turned out to be a good deduction.

The following was posted to Facebook, urging supporters of the pro-illegal protesters to contact Murrieta police and demand the release of the arrestees (phone number removed; the names below are being featured by their supporters all over Twitter and Facebook, and are public record in any case):

5 comrades were arrested at the Murrieta Border Patrol station today after one person from the group was assaulted by someone from the Anti-immigrant group (Fascist) and cops (Fascist supporters) and border patrol decided to detain the group.

The video below is from one of the fascists that filmed the arrest. The fascist then continued to yell, “taze them” and “jail them” and call them “f*****t” as the police arrested them and took them away. Warning: It’s extremely disturbing but important to watch, this is what fascists look like.

(Breitbart’s report notes two of the arrests, but there were five total.)

Gateway Pundit has a good summary of the race-baiting tactics of Mr. Lupillo Rivera, a popular singer who has shown up to involve himself in the protests on the pro-illegal side.  Video of his rant at the 1 July protest:

(Rivera is the man who was spat on by another protester; the incident I mentioned in the Murrieta town hall summary.)

Night has fallen now, and the buses will probably arrive in the next couple of hours.  The charter flight bringing today’s 140 illegals from Texas appears to have landed in San Diego shortly before 7:30 PM Pacific time.  The Border Patrol is giving no public information on any of this, but the plane was met by buses, and was surrounded by security.

In normal traffic, it’s about an hour and 15 minutes from the San Diego airport (Lindbergh Field) to Murrieta.  Assuming some administrative delays, the buses could arrive by 9:30 PM or so.  I suspect the Border Patrol will try to time it a bit later, angling for the point when the fewest protesters are present.

It bears noting, once again, how disgusting it is to think of the U.S. federal government sneaking around trying to do in the dead of night what it knows the people are opposed to.

Sign-off note:  As I go to post this, I have received unconfirmed information that the buses from San Diego did not go to Murrieta this evening.   No word on where they went, if that’s true.  Developing…