We don’t know yet if the second group of illegals to arrive in San Diego, which was transferred from the airport to three Border Patrol buses around 8:00 PM Pacific time on Friday, has reached its final destination.

But we do know at this point that it didn’t go to Murrieta.

Local news affiliates in San Diego pursued the buses as they left Lindbergh Field this evening, and confirmed that the buses went to the San Ysidro Border Patrol station,which is situated on the border near San Diego.

Additional reporting from another San Diego new outlet suggested that the group of 140 illegals was reloaded on the buses and was last seen heading out on Interstate 8, which runs east out of San Diego:

The migrants were again loaded into busses, headed south are on I-8. Their destination was unknown by most, including some authorities.

The group may be headed for El Centro, California, where the Border Patrol is also taking illegals flown in from Texas for processing.

It’s possible an attempt will be made to deliver the illegals to Murrieta tonight.  That may seem doubtful, but a late-breaking Twitter update from about 15 minutes ago suggests additional Border Patrol agents have arrived in Murrieta, apparently in the last hour.   Perhaps it’s a shift change, but it will bear watching.

Wherever the illegals go, it will take several days to process everyone, and their presence will be obvious.  Apart from all other considerations, this is terribly inconvenient and uncomfortable for them, especially the parents with small children.  (The Murrieta BP station’s facilities are meant for the temporary housing of small numbers of drug criminals.  The illegals’ time there, if the deliveries can be accomplished at some point, will be as bad as the conditions we’ve seen in Texas.)

Meanwhile, a Border Patrol representative has confirmed that a local Patrolman, like some of his counterparts in Texas, has now been infected with one of the diseases carried by the illegals.  It turns out that far more than four of the 140 who arrived on Tuesday had infestations:

Ron Zermeno, a Border Patrol union official, told 10News Wednesday that 40 of those immigrants were quarantined at the Border Patrol Chula Vista Station with active scabies and head lice. The rest were processed through other BP facilities and released.On Friday, Zermeno added that one of the BP agents processing the immigrants is now infected with scabies.“This is what I feared, and this is what I did not want to see,” Zermeno said.

Zermeno said the infected immigrants should have been stopped during medical checks in Texas, but were not because the agents there were overwhelmed.

Social media updates indicate about 40 protesters are still on-site in Murrieta.  Word was put out that protesters would rally again on Saturday morning at 4:30. 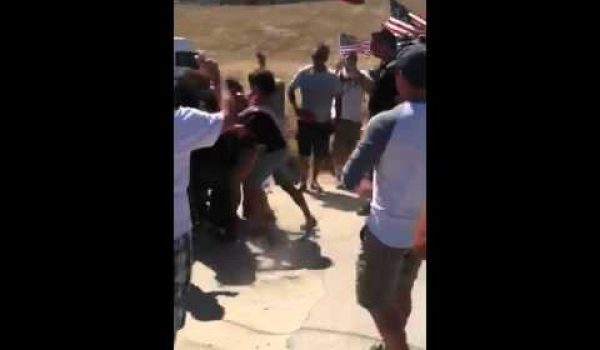 More arrests at Murrieta protest; feds silent on buses; buses diverted again?
Next Post
Obama back to being funniest person alive, in eyes of left