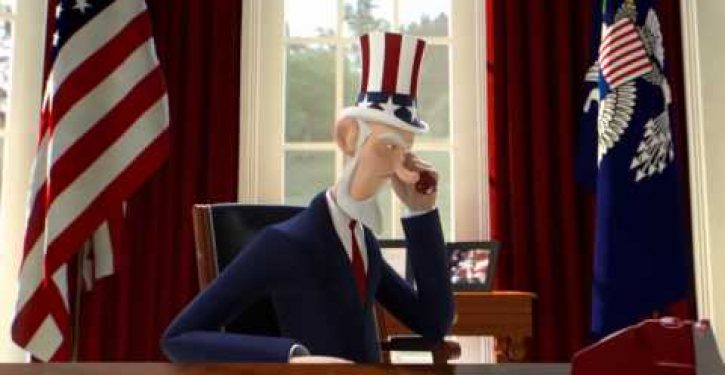 Regular readers of LU know that our philosophy is to let kids be kids. We see no compelling need to teach them that, for example, “nature can be cruel.” They will learn such bitter lessons soon enough. We are also not big here on indoctrination.

Having said that, we pass along with some trepidation the following press release/”prospectus” for a movie for kids titled UNCLE SAMta and dealing with the cold realities of government spending. Caveat lector.

UNCLE SAMta, the movie, is the creation of AJ Viviani and Sean Springer, who wanted to produce a movie based on the economy. “We got really interested in the economy when we saw that things were going south in 2008, and the housing market crashed,” said Springer.

“We looked around at the political climate, and we started talking, and as we worked together, we found that we had a particularly similar vision,” said Viviani. He and Springer found a way to combine that vision with their storytelling abilities, and thus the brainchild that is UNCLE SAMta was born!

Their mission was to make a movie that was not only filled with truth in the economic realm, but was also entertaining, and applicable to a range of ages. “We wanted to make a movie that we’d like to see,” said Springer. He described their film as fun, with a little bit of snarky, light-hearted satire.

“We’re looking at this as a family film that people can bring out and watch every year,” said Viviani, who aims for UNCLE SAMta to one day be considered a “Christmas Classic.”

Springer explained that they wanted to make something that taught about the political system in a way that appealed to children. “Kids don’t learn these kinds of things at school,” explained Springer. “Common Core – and things like that – don’t really teach them the basic details of economics. The way they learn about the economy is by doing it themselves.”

The filmmaker are looking to raise $100,000 through Kickstarter. The promo follows: