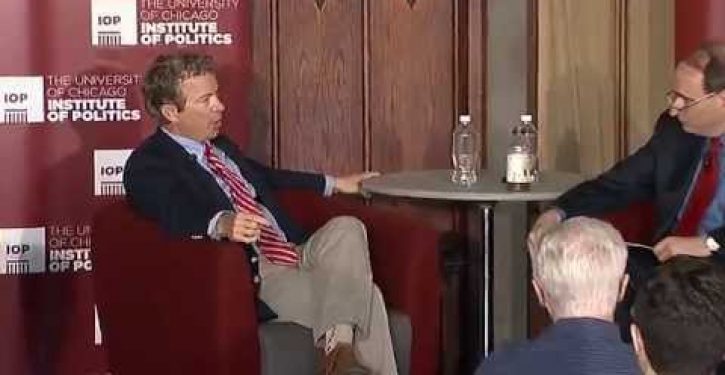 I will not let sloppy journalists characterize my position as “amnesty.” It is simply untrue. http://t.co/ToWmioTg0W

Well, Senator Paul, perhaps you should be worried that the public will not let sloppy politicians characterize their pro-amnesty positions as anything other than amnesty.

Here is why Paul’s position amounts to amnesty: While speaking with David Axelrod, Paul agreed that he “would grant [the 11 million illegal aliens] a legalized status in the form of a work visa and allow them to await citizenship.” The 11 million broke our law, but they will be allowed to stay and become citizens instead of complying with the law. They will not be held accountable to the current law, but instead their illegal conduct will be rewarded. That’s amnesty — in fact it is amnesty plus a perverse reward wrapped inside a terrible policy incentive.

For those inclined to agree with Paul on the need for “immigration reform,” it is instructive to note where his reasoning falls apart. He writes,

Paul makes it sound as if America will benefit from amnesty because the border will finally be secure after “reform.” In other words, we should just accept that border security is being held hostage, and we should gladly pay the amnesty ransom. The truth is that we have a better option: force politicians to enforce our laws at threat of losing their jobs. The entire debate about “immigration reform” is a terrible charade, riddled with nonsense spread by ill-informed politicians, including several Republicans.

Calling a bad policy a “reform” is one of the oldest tricks in the book, and Americans just aren’t buying it. The trouble that elites like Paul face is that a conscientious citizen, with an hour’s worth of free time, can learn as much about immigration policy as the average Senator. In the eyes of many concerned citizens, the president, Congress, and Senate are failing their duty to protect our border and maintain America’s sovereignty. In that regard, Sen. Paul is just about as guilty as the president. They’ve each carelessly promoted a “path to normalization” (Paul’s words), or “immigration reform” (as Paul constantly repeats).

Paul and Obama have both invited illegal immigration. Paul is only slightly less blatant in his disregard for the rule of law on matters of immigration. Paul, Obama, and the rest of the “immigration reform” crowd have all made clear that if you cross our border illegally, you will be allowed to stay. This sends a message to the entire world that we don’t have enough discretion to protect our national boundary.

Senator Paul claims to be opposed to “lawless” immigration policy, which he calls “a beacon for more illegal immigrants.” What does he expect will happen if Congress officially declares that 11 million illegal aliens will be granted amnesty? How will that be any less of a “beacon”? A congressional endorsement of amnesty will signal that we have largely abandoned enforcement of our immigration laws.

American politicians seem to be dissolving our border at the exact time many Western countries are moving to restrict illegal immigration, as well as legal immigration. For instance, in France, the Front National (FN) party achieved a record victory in last month’s EU election, finishing ahead of France’s two major parties. FN’s president, Marine Le Pen, in her memorable way, says this about immigration:

Immigration is an organized replacement of our population. This threatens our very survival. We don’t have the means to integrate those who are already here. The result is endless cultural conflict.

If only we had political leadership in America with half the national pride of France’s Le Pen. Instead, we must contend with politicians like Paul, who labor under the weight of certain historical myths. For example, he claims, “Immigrants are drawn to the magnet of free market capitalism here in the United States.” That claim is, in important respects, demonstrably false.

What Paul needs to realize is that no politician in this day and age will be given the benefit of the doubt when he recites platitudes; few politicians command even a shred of trust. This is especially true on immigration matters. So when Breitbart’s Tony Lee writes that Paul supports amnesty, sensible conservatives are prone to accept Lee’s characterization. That’s because, more often than not, politicians tend to obscure the facts while outlets like Breitbart tend to bluntly state the facts, and most readers recognize as much. Politicians, including Paul to an extent, have simply lost credibility.

Paul is not entitled to any deference because of his family name. In fact, it looks as if he might need a dose of the Cantor treatment. Unless Paul starts promoting enforcement and border security, with no amnesty ransom in exchange, he’ll continue to estrange himself from the voters who are paying attention. Given the crisis on our southern border, politicians should be attempting to build credibility with the public, not encouraging lawlessness.

The Obama administration, through executive orders and the bully pulpit, brought on the current crisis at our southern border. If amnesty passes, Congress will shout the same message the Obama administration has been sending: Give me your tired, your poor, your “disadvantaged” yearning for more government. If Paul is genuinely opposed to a “lawless” immigration system, then he should staunchly oppose any effort to reward illegal entry or visa overstay.

When Paul talks about “immigration reform,” this is nothing but a cosmopolitan euphemism for amnesty. Whether border enforcement is included in “immigration reform” or not, legalization means amnesty. If the 11 million illegal aliens are exempted from the law, and in fact rewarded, then we are faced with amnesty. Therefore, the much-touted border enforcement is nothing but a sweetener for amnesty. The immigration reform “compromise” Paul favors really boils down to this: We give the Democrats and their pro-amnesty GOP allies a cookie for doing what they are supposed to do, which is enforcing our immigration law.

Cartoon of the Day: ‘Honey, I shrunk the economy’
Next Post
Senator McCaskill and Obama administration bureaucrats: Most Americans are rapists