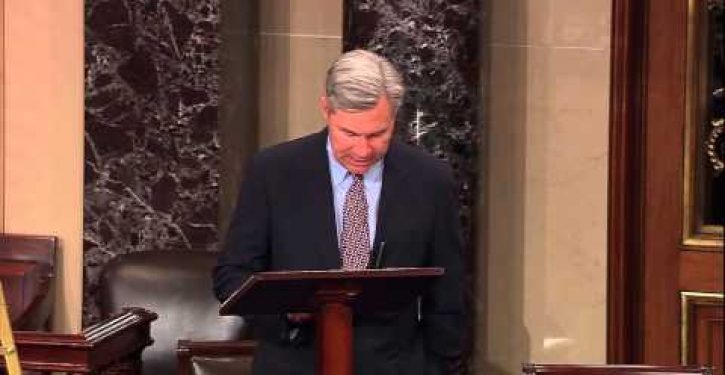 West Virginia Democratic Sen. Joe Manchin had some strong words during a debate on the Senate floor over the role of coal in global warming.

Though Manchin believes that mankind has contributed to global warming, he argued that eliminating coal from our energy mix would be disastrous. Last winter, when temperatures hit record lows across the country, people would have died without coal power, the senator from coal country warned:

If our reliability had failed during the polar vortex … there’s no question people would have died.

During that time coal provided 92 percent of the increase in energy needed to survive the disaster. If coal was not able to go online to backup the grid — 92% of it was driven by coal because it is dependable, reliable and is affordable.

Last winter, record low temperatures and record snowfall drove up power demand which put huge strains on natural gas pipelines and green energy production. Many gas plants and green energy facilities were shut down due to bad weather and cold during last winter, meaning coal plants slated for shutdown had to be ramped up to meet spiking power demand.

Manchin’s comments were made during a colloquy with Rhode Island Democratic Sen. Sheldon Whitehouse, who has taken to the Senate floor for 72 consecutive weeks to sound the alarm on global warming.

Whitehouse said that “severe weather” was the largest cause of power outages in the U.S., a trend which has been on the rise since the 1990s. He also championed bringing more green energy online through building a “smart grid” system that would allegedly lower energy costs.

Whitehouse also claimed that burning coal and other fossil fuels have caused sea levels to rise nearly 10 inches in Rhode Island since the 1930s. The Rhode Island Senator also said his home state’s fishing industry is suffering because the water is becoming too warm for flounder to survive.

Environmental Protection Agency regulations are forcing hundreds of coal-fired power generators across the country to be retired early because they won’t be economically viable if their operators install federally mandated technology upgrades.

Past EPA rules are supposed to retire 60 gigawatts of coal-fired power in the coming years, with most of these retirements occurring by 2016. New EPA regulations limiting carbon dioxide emissions from power plants will force the closure of more power plants, according to the agency.

In its regulatory impact analysis of the Obama administration’s Clean Power Plan, the EPA maintains:

Under the provisions of this rule, EPA projects that approximately 46 to 49 GW of additional coal-fired generation [about 19% of all coal-fired capacity and 4.6% of total generation capacity in 2020] may be removed from operation by 2020,” .

But coal plant retirements could also hurt grid reliability during extremely cold periods or even during heat waves. A report by the free-market Institute for Energy Research warned that the “polar vortex” which hit North America last winter could be a precursor to a larger energy crisis:

Without coal, parts of New England, the Midwest, and other regions would have experienced brownouts and blackouts that would have been economically disastrous and would have compromised public health and safety; in many instances it could have been life threatening,.

Gas prices spiked 1,000 percent in some areas in January and February 2014 and gas supply to industry and power plants had to be curtailed to accommodate residential demand. At one point about 75 percent of New England’s natural gas electric generating capacity was not operating due to lack of supply or high prices caused by infrastructure issues.

The capacity factor of America’s coal plants averaged over 70 percent this past winter while many gas plants could not get fuel due to infrastructure issues. What will happen when reliable baseload coal plants are closed in the next 20 months when their licenses permanently terminate?

Tweet of the Day: Take an extra hour for lunch to root for Team USA
Next Post
Cartoon of the Day: ‘Honey, I shrunk the economy’