The blogosphere has been alive in the last 48 hours with the sound (smell?) of smoking gun, after the revelation late last week that at the time of Lois Lerner’s remarkably convenient computer crash, the IRS had a contract with a company named Sonasoft for email back-up and archiving services.

The IRS contracted with Sonasoft from 2005 to 2011.  Sonasoft’s niche in the IT services world is explicitly organizing and backing up email files on Exchange and SQL servers, which the Sonasoft sales pitches point out are an increasingly unwieldy problem for IT departments and users.  As a state-of-the-art solution, Sonasoft offers SonaVault, a software package whose properties are so on-point for the catastrophe that supposedly stalked the Lerner emails that it’s positively ridiculous.

Consider some of the verbiage from this 2010 presentation on the benefits of SonaVault.  The slides are reproduced below; the pitch homes in on the requirement for companies to be ready for litigation and “eDiscovery,” or searching for and producing, on demand, the electronic records of relevant email transactions.

Of particular note, beyond the extremely pertinent focus on organizing email data to respond to litigation and discovery requirements, is the highlighted portion on Slide 28.  It points out that SonaVault provides a customer with continuous email archiving, even when a primary email server “fails over” to the standby server.  In other words, there is never any reason to fear the loss of archived emails.

The record at USASpending.gov verifies that the IRS had an annually renewed contract with Sonasoft at the time of the supposed loss of Lois Lerner’s emails, in June 2011.  Patrick Howley beat me to the finish line to report (at TheDC) that the Sonasoft contract was terminated shortly afterward.  The annual contract, which had been renewed in September 2010, expired without renewal on 31 August 2011.  The IRS-Sonasoft relationship was severed altogether on 8 September 2011, with a de-obligation purchase order.

So that’s awfully interesting.  Whatever Sonasoft’s obligations after the contract was terminated, it’s clear that the company had a relevant contractual obligation to the IRS at the time of the supposed email loss.  There seems to be no question that Sonasoft’s knowledge of the email “catastrophe” needs to be investigated.

But there’s more to this drama – and it’s (go figure) political.  Sonasoft is a small company, founded and run in Silicon Valley by a Mr. Nand (Andy) Khanna.  It isn’t clear whether Andy Khanna is any relation to Rohit (Ro) Khanna, a Pennsylvania-born attorney who served as an Obama appointee in the U.S. Department of Commerce, and is now a Democratic candidate for the House of Representatives in the 17th district of California (in Silicon Valley).  But what is clear is that the two other members of Sonasoft’s board of directors – the members other than Andy Khanna – are both working hard to get Ro Khanna elected.

Here are the players.  On the Sonasoft board of directors, Dr. Romesh K. Japra, M.D., is the chairman of the board.  The board director is Mr. Romi Randhawa, whose day job is president and CEO of HPM Networks, another Silicon Valley IT company.

And then there’s Ro Khanna.  Khanna has connections to Obama that go way back, to Obama’s first run for the Illinois state senate, when Khanna was at the University of Chicago as an undergrad.   Will Burns, a Chicago Democratic political operative, recruited Khanna to walk precincts with Obama during the campaign, and Khanna was reportedly star-struck:

“He was probably the first politician I’d met,” Khanna continues. “My recollection is that he was an exceedingly decent, gracious person, and that there was a lot of buzz around him as the future mayor. At the time, people talked about Obama as the next Harold Washington—who was, to be clear, viewed with extreme reverence. They thought Obama could be the next black mayor of Chicago. That got me interested in politics.”

Khanna ran a doomed campaign for the House from Silicon Valley in 2004, tilting quixotically at entrenched Democrat Tom Lantos on an anti-Iraq War platform.  That run garnered him connections among top Democrats, which, along with his early link to Obama, made him an obvious pick for a deputy assistant secretary job at Commerce when Obama took the White House.

Perhaps coincidentally, Khanna left the Department of Commerce in August 2011, the same month that the Sonasoft contract with the IRS expired.  (And, just to clarify, there is no obvious evidence that Khanna had or has a direct connection with Sonasoft, or the IRS Tea Party-targeting policy.)

In October 2011, Obama crony Vinod Khosla, the legendary venture capitalist, hosted a donors’ dinner for Khanna’s next run for Congress.  Khanna’s committee raised over $1 million for a proposed 2012 run against aging Republican Pete Stark.  But Khanna pulled out of the race early.

After the 2012 election – and this is what really caught Joshua Green’s attention – Khanna began preparing for a new campaign in Silicon Valley, this time with the biggest names from the Obama 2012 campaign team on his roster.  Khanna is making another run in 2014 against an entrenched Democrat (seven-termer Mike Honda), but he brings major firepower, especially for a guy you’ve probably never heard of:

What makes Khanna more interesting than your typical underdog is who else he has in his corner. On April 2, when he announced that he would challenge Honda, he also revealed that the people who will be running his campaign are many of the same ones who just got Barack Obama reelected. Even though Khanna has never been elected to anything, he has managed to sign up one of Obama’s top-three fundraisers, Steve Spinner, as his campaign chairman; Obama’s national field director, Jeremy Bird, as his chief strategist; and the president’s media firm, pollster, and data-analytics team, along with assorted other veterans of the reelection. Their aim is to build at the congressional level the same type of campaign they ran for Obama. It’s as if Bill Belichick and the staff of the New England Patriots decided to coach a high school football team.

Somebody really wants to get this guy elected.  And the interesting thing is that two of Sonasoft’s three board members appear to be in the middle of it.

Romi Randhawa, CEO of HPM Networks, is perhaps of lesser interest in this regard.  His main appearance was as joint host of a fundraising reception for Khanna in October 2013.

But Romesh Japra, a high-profile figure in Silicon Valley’s Indian-American community, seems to be playing a bigger role.  Besides being one of Khanna’s major donors ($7,400 since 2011), Japra has been implicated in a byzantine effort to run multiple Republican candidates in the primary, and thus divide the GOP vote so that Khanna and Honda, the Democrats, face off only with each other in November 2014.

California adopted a non-partisan “jungle primary” system via Proposition 14 in 2010, and the Golden State’s primaries now advance the top two vote-getters, even if they’re both from the same party.  If you want to make an intra-party challenge to a strong incumbent, the most effective divide-and-conquer strategy may well be an across-the-board “more the merrier” approach.

Republican candidate Vanila Singh, running for the 17th district seat this spring, had the GOP field to herself, until a pair of high-profile Khanna supporters encouraged another Republican, Joel Vanlandingham, to join the campaign late.  One of that pair was reportedly Romesh Japra (see last link above).

The primary result on 3 June was satisfactory for Khanna supporters, although things might well have turned out the same without Vanlandingham as a spoiler.  Honda and Khanna will have the race to themselves in November.

The peculiar thing, in any case, is Sonasoft’s collateral connectedness to the Khanna drama, on which the Obama machine has left such distinctive fingerprints.  It doesn’t seem to signify anything more than the web of vaguely icky crony connections that characterize so much of government and politics today – regrettably, on both sides of the aisle.

But it’s one more thing for the “If Republicans did this there’d be a major outcry” column.  Democrats have done it, however, so we may never know the whole story.

*UPDATE*:  Sonasoft posted a statement on its website on Tuesday evening (about an hour ago as of this update posting), in which it clarifies three important things.

1.  The company never had access to or stored or otherwise manipulated IRS emails.  IRS emails were handled and stored at all times on servers in IRS facilities which were not managed or maintained by Sonasoft representatives.

Comment:  This is what I assumed to be the case (see discussion in the comments section), and what reader NW Conservative, among others, affirmed.

2.  Sonasoft’s contract was with one division of the IRS, the Office of Counsel.  According to Sonasoft:

Comment:  This would mean that Sonasoft’s services were not implicated in the email archiving practices that may or may not have affected Lois Lerner’s emails.

“To further clarify, no Division within IRS ever used Sonasoft’s email archiving software. Only a Division within the IRS used any Sonasoft product and that was our email replication software, not our archiving or backup software. ”, said Andy Khanna.

That said, it is absolutely classic that investigating the Sonasoft tip turned up an Obama crony connection anyway.   There’s one under every rock. 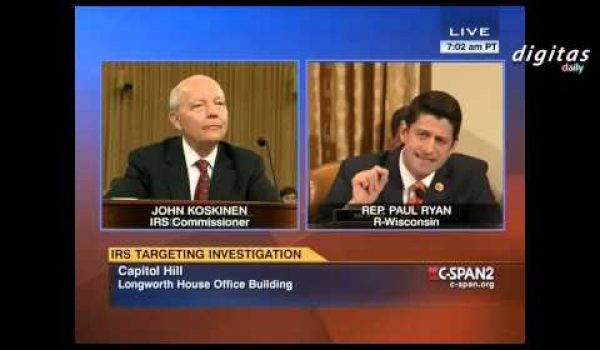