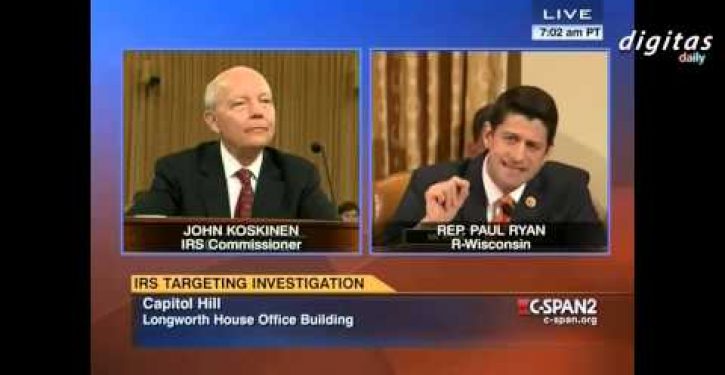 Talk about your rotten luck! Ten days after the House Ways and Means Committee sent a letter to the IRS asking if the agency was involved in any targeting of conservative groups, Lois Lerner’s computer suffered a mysterious crash which led to the destruction of her hard drive and the disappearance of emails. If that’s not bad enough, the only emails that were lost to or from other government agencies, such as the White House and Justice Department. If I were you, I’d steer clear of walking under ladders when Lerner is in the vicinity.

The initial letter was sent in June of 2011. The crash occurred ten days later. Yet as recently as March 26 of this year, IRS Commissioner John Koskinen gave Congress his assurance that the department could still deliver “all of the emails” on Lois Lerner’s computer.

Now this from the Wall Street Journal’s Kimberly Strassel:

Lois Lerner’s emails are lost, and they need finding. In the meantime, their very disappearance tells us that Congress is sniffing down the right trail.

A year into congressional investigations of IRS targeting, we know two things beyond a doubt. We know from the public record that starting in 2010 the most powerful leaders of the Democratic Party—President Obama, Senate chairmen, House Democrats—ran a ceaseless campaign pressuring the IRS to silence conservative groups. We also know from internal IRS emails that Ms. Lerner, the former head of exempt organizations, was at the epicenter of an agency effort to silence those very groups, in the precise same time frame.

What we don’t know is the interaction between the two. The IRS’s deliberate withholding for a year of Lerner emails allowed the press and liberals to crow that there was no “there” there—zero evidence of Lerner collusion with anybody in the Democratic Party. At the very worst, went the explanation, Ms. Lerner and her IRS pals were zealous bureaucrats, primed to crack down on campaign money, and therefore eager to interpret the Democratic campaign as an order to act.

As to Ms. Lerner’s behavior, consider that House Ways & Means Chairman Dave Camp first sent a letter asking if the IRS was engaged in targeting in June, 2011. Ms. Lerner denied it. She engineered a plant in an audience at a tax conference in May 2013 to drop the bombshell news about targeting (maybe hoping nobody would notice?). She has subsequently asserted a Fifth Amendment right to silence in front of the only people actually investigating the affair, Congress. Now we learn that her hard drive supposedly defied modernity and suffered total annihilation about 10 days after the Camp letter arrived.

Is there something in those lost emails? The fact that they are “lost” at all probably answers that question.

Does anybody truly believe there isn’t a “smidgen of corruption” behind the IRS targeting scandal?

There’s definitely one person who doesn’t believe the lies coming out of the IRS anymore:

America should be fired up on both sides of the aisle. This is above and beyond any Nixonian level targeting of political opponents. The cover-up is even worse. Nixon only lost 18-minutes of the Watergate Tapes. The IRS has lost two years worth of communications.

Pastor horribly burned by Muslims warns America against Islamization
Next Post
The gluten-free craze: Is it healthy?