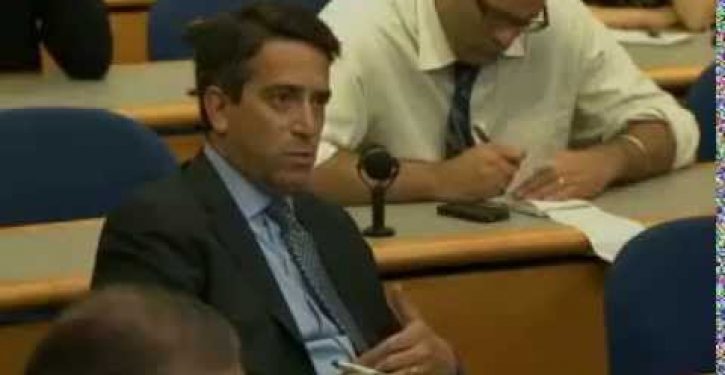 The questioner in this clip is James Rosen.  Yes, that James Rosen: the one whom Eric Holder named — briefly and ridiculously — as a possible “co-conspirator” in violating the Espionage Act, for the sole purpose of seizing a big stash of Rosen’s personal emails and phone records.  Soon it may the case that more journalists than not will have been the targets of bogus dealings by the Obama administration.

In any case, the Washington Free Beacon has a nice transcript of this utterly predictable moment.  With Ahmed Abu Khattalah roaming Benghazi giving media interviews in the months since September 2012, it couldn’t have been, well, rocket science, to figure out a way to pounce on the guy.  Ms. Psaki was characteristically sarcastic, and Rosen was characteristically dogged (emphasis added):

Psaki had previously told AP reporter Matt Lee that it should not come as a surprise that a suspected terrorist would be more likely to show up for an interview than he or she would for a scheduled meeting with the U.S. special forces. “The question being put to you, it seems to me, is why U.S. special forces couldn’t have an unscheduled meeting with this individual in a period of time less than, as you put it, just a few years?” Rosen asked.

The State Department spokeswoman dodged the question, telling Rosen that there are a myriad of [sic] reasons why individuals, including terrorists, meet with reporters.

At one point, Psaki taunted Rosen, apparently suggesting that he volunteer to serve as terrorist-bait:

“Well, we appreciate your view. If you’re volunteering yourself for future endeavors, we’ll take that into account,” Psaki responded in a snarky tone.

Jason Chaffetz (R-UT) wondered in July of 2013 why the U.S. government couldn’t seem to get hold of Abu Khattala, when CNN had been able to interview him only a few days before.

But then, Abu Khattala was interviewed even earlier by the New York Times, which recounted the following on 18 October 2012, a bare five weeks after the 9/11/12 attack:

But just days after President Obama reasserted his vow to bring those responsible to justice, Mr. Abu Khattala spent two leisurely hours on Thursday evening at a crowded luxury hotel, sipping a strawberry frappe on a patio and scoffing at the threats coming from the American and Libyan governments. …

Mr. Abu Khattala’s defiance — no authority has even questioned him about the attack, he said, and he has no plans to go into hiding — offered insight into the shadowy landscape of the self-formed militias that have come to constitute the only source of social order in Libya since the fall of Col. Muammar el-Qaddafi.

For my money, the strawberry frappe was a nice touch.

Another aspect of the case puts Psaki’s snide demeanor in an interesting light.  Abu Khattala is reportedly now being held onboard the amphibious transport dock ship USS New York (LPD-21) in the Mediterranean Sea.  (According to Fox, he is to be transported back to the U.S. on New York, which means a voyage of a couple of weeks from where he started.)

But an old sea dog knows that if the USS Bataan (LHD-5) ARG and 22 MEU are deployed to the Mediterranean and Persian Gulf, as they currently are, there wouldn’t be any other East coast gator-freighters, like New York, deployed forward.  What is New York doing there?

As of late May, New York was just starting 6 months of pre-deployment work-up training with the USS Iwo Jima (LHD-7 ARG) and 24 MEU.   It’s not clear that New York was in her homeport (now Mayport, FL) on the date of the Jacksonville news story.   But she could have been — if she left immediately thereafter to head for the Mediterranean for the sole purpose of picking up Abu Khattala.  Prior to the 28 May report by the Jacksonville Daily News, the last update at New York‘s official command website was on 30 April, and recounted hosting an old sailor from the ship’s namesake USS New York, the World War I/II-era battleship (BB-34), for a luncheon onboard.  This would have occurred in port on the East coast, probably in Mayport.

So sometime in May, or possibly early June, it appears that the decision was made to deploy New York to the Med in order to receive Abu Khattala when he was apprehended.  Gator-freighters don’t move very fast, although the San Antonio-class LPDs can make better time than their predecessors.  It would normally take New York every bit of 12-14 days to get from Mayport to the central Med.

A Navy News Service report confirms that USS Iwo Jima was in Norfolk, VA on 9 June (and therefore the Iwo Jima ARG was not deployed to the Med.  Only USS New York is there).

It appears that the administration was able to select the time to pick up Abu Khattala pretty specifically.  Apparently, the administration knew it was going to nab him far enough in advance to send New York over to take him onboard.  It’s an interesting operation that takes 21 months to bring off, but can be timed so accurately in the final stretch.