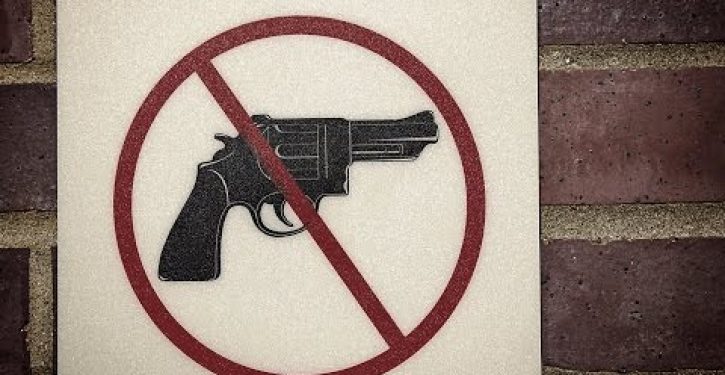 A North Carolina restaurant that had recently instituted a “no gun” policy was robbed at gunpoint Sunday, raising the question, do gun-free zones work, or are they a magnet for criminals?

Three suspects entered the rear door of The Pit Authentic Barbecue restaurant in Durham just before 9 p.m. Sunday, and forced its employees to lie on the floor while the robbers went about their business, according to ABC affiliate Eyewitness 11 News, which reported:

The bandits assaulted two employees during the crime, but they were not seriously injured.

“They’re doing great,” restaurant owner Greg Hatem said. “One of them actually went to the hospital and was released. They took a good look at him, he’s fine.”

Hatem also said there were a few patrons in the dining room while the robbery was happening in the kitchen area. Workers were able to ask them to leave, and got them out safely through the front door.

This incident came in the wake of shootings at several Jack in the Box restaurants shortly after it instituted its own no gun policy. It did so in response to mounting pressure from Moms Against Guns.

The first shooting occurred at a Nashville location on May 12, within days of the chain announcing its new “no gun” policy. The second happened Sunday in Houston. In each incident a customer was shot, though not fatally, according to Buzzpo.

“The criminal didn’t follow the new gun free zone proclamation on Jack in the Box’s premises, as by definition, he is a criminal,” observed conservative talk radio host Dana Loesch after the Nashville shooting. “Law-abiding citizens, not wishing to incur fines and police involvement, obey such laws and similar edicts from businesses because they follow the law — and by doing so are disarmed while criminals remained armed.”

“Every one of our mass murders in our country has occurred in places where guns are prohibited,” said Larry Pratt, the executive director of Gun Owners of America back in December in an interview on Fox News Sunday. “The legislation that is on the books is lethal; it is killing people. All of these gun-free zones are murder magnets, and we simply have got to get rid of them.”

Gun rights activist Colion Noir noted that “Mass shooters are pathetically non-confrontational” in the following NRA commentary. “They pick their targets like sexual predators pick their victims — weak and defenseless.”

Watch Noir’s commentary below, via the National Rifle Association.