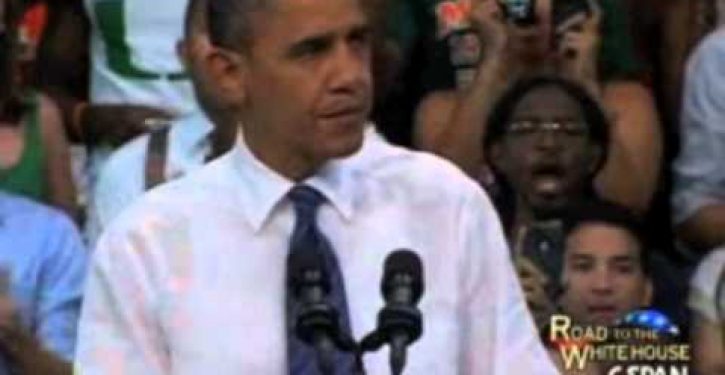 Despite Barack Obama’s campaign boast that al Qaeda was “on its heels” and “on the run,” CNN is reporting that both the United States and our Western European allies are facing a three-faceted threat from the global jihadists, which in turn is the catalyst for “significant concern inside the U.S. intelligence community.” The CNN Pentagon beat corespondent is privy to inside information that a U.S.-born al Qaeda operations and planning honcho in Pakistan is being “closely monitored by American intelligence.”

Without naming sources, CNN’s Barbara Starr reported, “This is not al Qaeda on the run; this is someone they’re watching very closely.” She added that even though the “threat stream” from the al Qaeda terrorists has been in a state of flux during the past six months, none of the threats has been corroborated, at least publicly.

Starr’s anonymous sources in the Department of Defense tell her the threats appear as “a lot of activity where intelligence suggests there are operational cells” but so far, “we do not see operational cells of al Qaeda inside the United States.” In the parlance of those in uniform, Starr’s unknown sources could be covering their proverbial bacon by emphasizing the possibility of an al Qaeda presence already in operation within America’s borders.

Up threat stream without a paddle…

Multiple unnamed Pentagon sources tell CNN that there are three main al Qaeda “threat steams” they have reason to believe have the United States and many of our allies directly in their cross hairs. The Islamist affiliate based in Yemen, al Qaeda in the Arabian Peninsula (AQAP) was initially cited as actively planning to hit Western targets with a special emphasis on a domestic strike on the United States.

Also referenced was the Pakistan-based “core” of al Qaeda, who the current Commander-in-Chief assured the nation and the world during the last presidential election was “decimated.” Going by the nom de guerre of Abdullah al-Shami, the head of the South-Central Asian branch, is highly suspected of planning a strike somewhere within the United States.

Further cause for concern is a “spillover” from the Syrian conflict. Upwards of 70 American citizens are al Qaeda fighters who have already received their baptism by fire in Syria’s queer combination civil war/jihadist-on-jihadist battle for power. U.S. government officials state that “a group of senior al Qaeda members in Syria formed to conduct external operations against [unspecified] Western targets.”

Reportedly, many of the American al Qaeda have already returned home, but not alone. U.S. officials fear those returning have “other fighters with Western passports” in tow.

A timeline: What did Obama know about problems at the VA and when did he know it?
Next Post
CIA: No more vaccination campaigns in spy operations