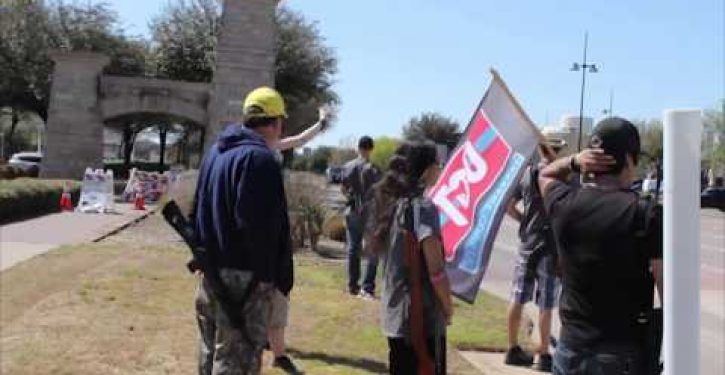 It may be that too many of us own guns or know respectable, chivalrous, law-abiding people who own guns.  Attempts like this one, by Mother Jones, to frame gun owners and gun-rights activists as misogynistic thugs just aren’t going to get traction.  Not outside of the leftosphere echo chamber, at any rate.

The Mother Jones story promises us “spitting, stalking, rape threats.”  It delivers on the spitting and stalking.  Crediting the spitting charge assumes that we can take the word of the victim, whose account is the only one we have to verify that she was spat on in the airport in Indianapolis.  I have no reason to impugn her statement, so let’s just take her word for it and stipulate that a disgusting man spat on her in public, while other people watched and did nothing.  The victim believes she was attacked because of her connection with gun-restrictions advocacy: she says that just before he approached her, the man was looking back and forth between her and a TV screen on which she was visible, arguing for gun restrictions.

The same woman, Jennifer Longdon of Phoenix, reports being approached by a man at her home, who fired at her with a water pistol and then taunted her by demanding, “Don’t you wish you had a gun now, bitch?”  She reported that incident to police, who have been unable to generate any leads on the man’s identity.

Another instance of stalking, meanwhile, occurred in Texas, where a man from a chapter of Open Carry Texas published audio of a call made to police during one of OCT’s public demonstrations, and included the caller’s name and contact information in a video composite of the incident.  The woman who made the call received nasty phone calls afterward.

I would hate that too.  Anyone who wanted to could obtain the same identifying information from the police, which is how OCT got it, but I certainly have no hesitation in condemning the subsequent harassment, per se.  It’s wrong, whether the victims are gun-restrictions advocates, supporters of traditional marriage in California (whose victimization was enthusiastically abetted by the leftosphere), or – as in the case of the woman caller in Texas – bystanders who just don’t like it (but clearly don’t think it’s actually an emergency) when they see men gathered in public waving flags and signs and carrying guns.

Of the promised rape threats, there seems to be no trace in the Mother Jones article.  There is a sophomoric interlude with a female mannequin at a gun range.  And there’s a passage from the life of Alex Jones (Infowars), in which he mixes it up with an older man at a Moms Demand Action event in a taco joint in San Antonio.  I know, I know.  Alex Jones.  I don’t count myself tarred by what he does either.  But for the sake of rhetorical hygiene, I do note that it’s a stretch to call it “targeting women” when Jones shows up at a Moms Demand Action event and gets in the face of a man.

One doesn’t want to overreact to the endlessly predictable game of Memes-n-Themes from the left.  The Mother Jones piece is so clearly an instance of impressionistic demonization, it’s hard to get very excited about it.

Mother Jones could have reported instead on something interesting, which is that the Open Carry chapter of Tarrant County, Texas parted ways with Open Carry Texas (OCT) after a recent, widely reported incident at a Jack-in-the-Box in Plano.  Moms Demand Action made demonstrably false claims about that incident, but the parent OCT organization’s concern was that the Tarrant County group didn’t notify the police in advance of its plan to demonstrate open carry in the particular places it chose, including the now-infamous Jack-in-the-Box.

The question this raises is whether those engaging in legal open carry should have to notify the police in advance.  That question gets at the very heart of what gun rights mean.  Open Carry Texas has adopted one policy posture because of its concern about how appeals are made to the public.  Open Carry Tarrant County has favored another view, one that is purer from the standpoint of logic.  If open carry is legal, and by definition is public, why does anyone need to notify the police in advance that he’s going to exercise that right?  Indeed, how should rights activists of any stripe feel about the heckler’s veto being used against their exercise of a right – which is basically what’s happening when the exercise of a right is policy-limited because of the expected reaction of someone else?

That is a question worth talking over.  Not all gun-rights activists would answer it the same way, nor is there partisan uniformity of opinion about it among, say, Democrats versus Republicans.  People’s sentiments about that question would have far more explanatory value for poll results like these than do the images of mindless demonization evoked by the Mother Jones article.

When it comes to those images, the analogy is obvious:  gun enthusiasts are portrayed like the villains cranked out by a Hollywood script mill, and everybody knows those made-up composite characters don’t represent any significant segment of the real-life population.

Team Obama: Schools must enroll illegals to keep funding
Next Post
Who is buying up U.S. Treasuries using Belgium as the front man?