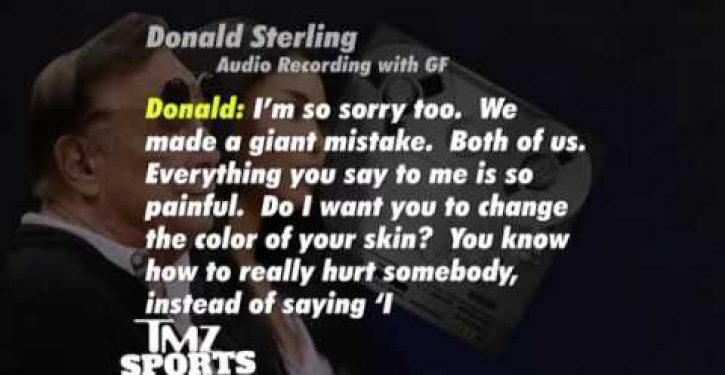 Even a man who is pure in heart
and says his prayers by night
may become a wolf when the wolfbane blooms
and the autumn moon is bright.

Even Ivory soap is no more than 99 and 44/100% pure, so what are the holier-than-thou adherents to the religion of liberalism supposed to do? No one is without sin — not even the left’s patron saint, Barack Obama, who has said things when the mic was live that he wishes he hadn’t.

This boils down to a major “purity” problem for liberals. By this I mean that everyone who follows lockstep in the teachings of Saul Alinksy and his disciples is automatically 100% good, and anyone who doesn’t is 100% evil. There are no shades or gradations, no exceptions.

Wherein lies the problem. This two-state solution seldom plays out to the left’s satisfaction. We saw this in 2012, in the case of George Zimmerman, who turned out not to be white nor demonstrably racist in the eyes of the FBI. We saw it again just this past week in the wholesale condemnation of rancher Cliven Bundy, who it now appears has a higher opinion of blacks than Jesse Jackson and Al Sharpton do of Jews.

Speaking of Jackson, Sharpton, and Jews, these strange bedfellows are in the headlines again, as yet another story that exposes the myth of purity unfolds. Donald Sterling (né Donald Tokowitz), Jewish owner of the L.A. Clippers, was recently chosen by the Los Angeles NAACP Branch to receive its Lifetime Achievement Award on May 15th.

That was before TMZ released an audio in which Sterling schools his girlfriend, V. Stiviano — who ironically is black and Mexican — on the need to keep the various races separate. “I’m living in a culture,” he tells her at one point, “and I have to live within the culture.” At another point, he is less circumspect, chastising Stiviano for wanting “to broadcast that you’re associating with black people. Do you have to?”

The revelation prompted Jackson and Sharpton to insinuate themselves into the NAACP decision. Jackson urged the league to “respond and respond quickly” — and importuned the players to do something during the game to “show a sign of indignation,” recalling that Miami Heat players wore hoodies as an expression of outrage over the “injustice to Trayvon Martin.”

Sharpton, in a statement to Euroweb, said:

The NBA must investigate L.A. Clippers owner, Donald Sterling’s, recent racial comments that were caught on tape and discipline him. No one should be allowed to own a team if they have in fact engaged in this kind of racial language. We are prepared at National Action Network to rally in front of the NBA headquarters if this matter is not immediately dealt with.

Sharpton and Jackson were both curiously silent when another basketball aficionado made strikingly similar comments on the need for “cultural purity”:

You just can’t come in the neighborhood. I’m for democracy and letting everybody live but you gotta have some respect. You can’t just come in when people have a culture that’s been laid down for generations and you come in and now sh*t gotta change because you’re here? Get the f**k outta here. Can’t do that!

That sentiment was part of a rant delivered in February by New York Knicks fan Spike Lee.

Returning to the commotion over Sterling, his views and attitudes on race are nothing new. In 2006, he was sued the U.S. Department of Justice for housing discrimination. The government’s case turned on his refusal to rent to non-Koreans in L.A.’s Koreatown and to blacks in Beverly Hills. Why wasn’t the NAACP aware of his discriminatory practices sooner? One possibility is that the group sought to overlook Sterling’s less-than-sterling past because he is a Democrat, who contributed to the political campaigns of recalled  California governor Gray Davis and former U.S. Sen. Bill Bradley.