Watching the liberal mind at work can be a source of mild fascination. Take the kneejerk reaction to the case of beleaguered Nevada cattle rancher Cliven Bundy. His name has been in the news for a couple of weeks, ever since federal agents showed up on his land, armed, to collect two decades worth of grazing fees. In the brief standoff before the federales were ordered to stand down, they shot and killed two of Bundy’s cattle, confiscated a dozen more, and Tazed his son.

Ordinarily, a case like this — the little man against the vast bureaucratic machine — would evoke the sympathy of libs, but in this instance the man at the controls was Barack Obama, around whom they closed ranks once and for all early in his first term. Accordingly, for the first 10 days or so, commentators on the left played defense, trying desperately to persuade readers that this was not another case of the power-hungry president flexing his big-government muscles.

Then Bundy was caught uttering the archaic term Negro in a context that also included the words slavery and cotton picking, and overnight he went from folk hero to fall guy. Yesterday the predictions from the liberal media were that conservatives would abandon his cause because of his racist comments.

Today, the other shoe has dropped. In a bitterly satirical headline, the Daily Beast’s Michael Tomasky observes ironically, “Republicans Are Racist? That Can’t Be.” The New Republic’s Brian Beutler takes a more conventional approach to venting his high dudgeon. His piece is titled “Racist Nevada Rancher Cliven Bundy Reveals the Depths of Conservative White Supremacism Denial,” but since the phrase white supremacism never comes in the body of his rant, let’s assume an overzealous editor was responsible for the headline.

Steven Colbert perfected the role of a self-deluded conservative who’s blinded himself to the existence of race and racism in American society. Liberals love the act because the conservatives Colbert parodies really do gloss over the roles race and racism play in American life. He’s exaggerating, but he cuts very close. Conservatives, on the other hand, can’t stand it — not so much because they think he’s wrong about conservatism, though they do, but because they think he’s wrong about the country, and is tarnishing conservatism with his own analytical error.

But he isn’t making an error. Cliven Bundy proves his point.

If there is a conservative who denies “the existence of race and racism in American society,” I have yet to meet him. Both are inescapable realities of America in the twenty-first century, though they happen not only on Nevada ranches but in places the Brian Beutlers are blinded to. If not motivated by racism, the courtroom laughter of the relatives of four black men on trial for taking part in the near-fatal beating of a white Detroit motorist was guided by something just as insidious. But Beutler and his kind haven’t uttered a peep about the case or scores of others like it. It doesn’t fit in with their narrative that only the right is racist.

Neither do the views of Cliven Bundy, but what liberal is going to miss the chance to play the race card — especially when it gives him an opportunity to divert attention from the real topic at hand.

Oregon joins list of states with failed Obamacare exchanges
Next Post
Bundy crisis I: Conservatives throw the republic under the bus 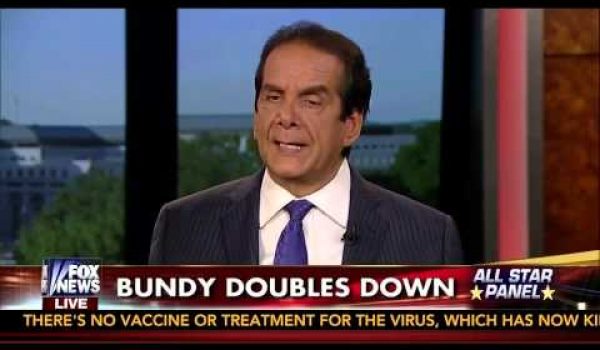