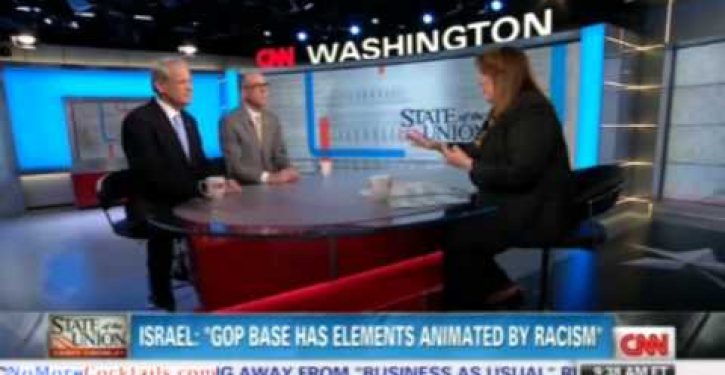 It was a one-two punch in the last four days, as first Nancy Pelosi, and then Representative Steve Israel (D-NY3), made absurd comments about Republicans and racism.

There’s no way to describe Pelosi’s comment other than as “demented.”  It’s not even clear what century she thinks we’re in.  Apparently it’s the 19th, given the character of her comment.  There’s video below, with the remark from her press conference on Thursday, but here’s the money quote:

“I think race has something to do with them not bringing up the immigration bill,” Pelosi said. “I’ve heard them say to the Irish, ‘If it was just you, it would be easy.’”

The media simply take up these themes, no matter how dementedly they are presented.  Instead of (quite logically) questioning Pelosi’s sanity – or at least her mental alertness and rhetorical intent – they obediently reframe these impressionistic burbles as if they make sense, and then run with them.

That’s what Candy Crowley did on Sunday morning, when she had a segment on her CNN show State of the Union with the chairs of the Republican and Democratic Congressional Campaign Committees.  Steve Israel was on for the Democrats, and after playing the Pelosi clip, Crowley broke into a recitation of boilerplate from Israel to ask him point-blank if the Republicans are racists.

Newsday has the transcript:

Host Candy Crowley asked Israel: “Do you think your Republican colleagues in Congress are racist?”

“To a significant extent, the Republican base does have elements that are animated by racism,” said Israel, (D-Huntington) during CNN’s “State of the Union” program. “That’s unfortunate.”

The video is below.  The beginning is slow, but the whole thing is about the demented “racism” theme, so don’t skip it.  It’s all, as they say, good.

Picture of the Day: Top DC Dems, including Obama, took money from Kochs
Next Post
Sen. Harry Reid on #BundyRanch standoff: ‘it’s not over’