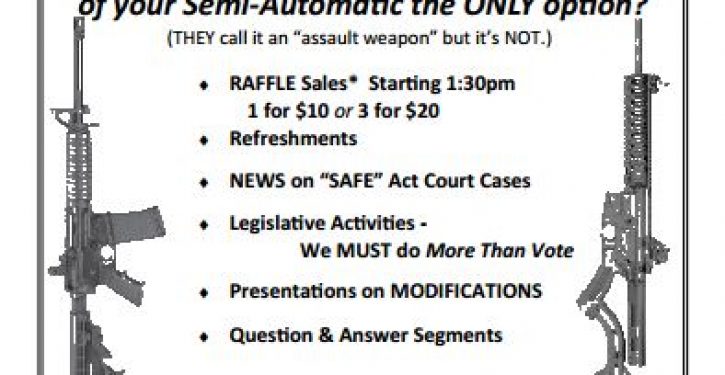 In an act of civil disobedience, a pro-gun group in upstate New York is preparing to burn SAFE Act gun registration cards to protest provisions of the new law.

The group, known as the NY2A Grassroots Coalition, is holding a Safe Act Forum at the Elks Banquet Hall in Saratoga County, where they will discuss the “importance of not registering firearms” with the state.  Methods of circumventing the SAFE act through civil disobedience and modification to existing firearms will be discussed, a legally modified AR-15 will be raffled off, and gun registration forms will be burnt in protest.

NY2A Grassroots Coalition is hosting a SAFE Act educational forum at the Elks Banquet Hall in Saratoga Springs on Sunday.

In conjunction with this event, which starts at 1:30 p.m., NY2A is inviting the public to burn SAFE Act registration forms, which will be provided, in the parking lot of the hall. The protest burning will take place at about 4 p.m.

The event is designed to highlight the importance of NOT registering firearms with the state. NY2A and other grassroots Civil Rights organizations have held or scheduled more than two dozen SAFE Act forums around the state ahead of the April 15 firearms registry deadline.

In Saratoga, speakers will address ways to avoid the firearms registry that include civil disobedience, as well as modifications that can be done to a firearm so that it does not meet the state’s arbitrary and capricious definition of an “assault weapon.”

Firearms registration has historically led to confiscation. And firearms registries have often failed due to low participation rates. So far, the state has refused to release the number of registered firearms under the SAFE Act.

The importance of direct political action will also be discussed and NY2A’s More Than Vote campaign will be presented to gun owners. Voter registration will be available on site and we are inviting area residents to learn more about volunteering for political campaigns.

An AR-15 that does not meet the legal definition of an “assault weapon” will be raffled off with proceeds going to the continuing fight against the SAFE Act.

Here is a copy of their flyer…

The group claims that “registration is confiscation.”

Prior to passing his anti-Second Amendment legislation, Governor Cuomo wondered out loud about the possibility of confiscation in New York.  And in New York City, confiscation notices have already gone out to some legally armed residents.

Governor Cuomo would like you to believe that only right-wing ‘extremists’ think that they are coming for your guns.  But it’s actually the Second Amendment-trampling Democrat extremists who really do want to take them that are the problem.