Never in the history of hornswoggling has anyone been hornswoggled quite as badly as Bill O’Reilly last week.

The occasion was a White House event called “My Brother’s Keeper.” The president talked about rescuing young black men from the “disparities” they experience every day in schools, courts, income, families, housing, jails, drugs, jobs, crime and … well, you get the picture.

O’Reilly was there, and the president was happy: “If I can persuade Sharpton and O’Reilly to be in the same meeting,” that was a good sign, he said.

The president also sprinkled buzzwords like “personal responsibility” into his remarks.

The key to this crowd is watching what they do, not how they justify it.

But they are at their most duplicitous when they talk about race and “groups that have had the odds stacked against them in unique ways that require unique solutions, groups who’ve seen fewer opportunities that have spanned generations.”

Cue the violins of racial victimization. That is what this program – and this president – is all about. This president is presiding over the most race-conscious administration in history. He’s proud of that. That is why his Department of Justice is full of functionaries whose entire career is one long exercise in Critical Race Theory, a doctrine that proceeds from the assumption that white racism is everywhere.

That is why enforcers from Department of Education are traveling the country, rooting out “racism” in schools.

That’s why the Attorney General of the United States sent a team of community organizers to Sanford, Fla., to pressure local elected officials to indict George Zimmerman for murder in the killing of Travyon Martin.

That is why the president nominated Debo Adegbile to head the civil-rights division at the Justice Department. Adegbile’s major claim to fame is pleading for the innocence due to racism of convicted cop killer Mumia Abu-Jamal. The president chose him not in spite of his work, but because of it.

This is what Obama was talking about in 1992 when he introduced his friend and mentor, Professor Derrick Bell, at a meeting of black law students at Harvard. Bell invented Critical Race Theory.

The most visible symbols of Critical Race Theory and white racism were also in attendance at this taxpayer-funded White House meeting, starting with the parents of Trayvon Martin. They have made a career out of appearing before national groups like the NAACP and the National Association of Black Journalists to talk about how racism polluted their son’s upbringing; how racism caused Zimmerman to stalk and shoot him; how racism caused the jury to acquit him. And how racism causes people to write columns like this, reminding others that Trayvon was a thug with a history of violence, lawlessness, and drug abuse.

That is pure Critical Race Theory.

Even a cursory reading of the larger black websites – Grio, The Root, Huffington Post Black Voices, Ebony, Jet and hundreds more – shows how deep and wide these beliefs are. Or on TV every day, where Toure of MSNBC is their perfect spokesman: “The accumulated impact of historic discrimination and the advantages of white privilege and the systems perpetuating” it are responsible for widespread black dysfunction, said Toure. “Not personal responsibility.”

The day after the president was crowing about O’Reilly’s support for My Brother’s Keeper, the drumbeat of racism continued: A Chicago labor union said public transit was racist because blacks spend more time commuting.

That same day, Prince said blacks in entertainment are victims of relentless discrimination. That same day, Steven Colbert made relentless racism the topic of one his regular bits on the subject. Recently Salon and Atlantic magazines ran pieces about how whites are “slaughtering” black people. And how black people should start to fight back.

They were not talking metaphorically. Or apologetically. Or secretly.

Bill O’Reilly is usually pretty good at keeping this out of his No Spin Zone. But not this time.

Cartoon of the Day: Trampled
Next Post
Video: Congressional candidate weighs in on issues of the day while seated on toilet 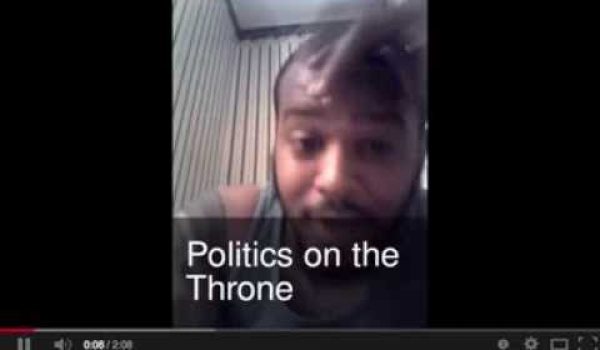