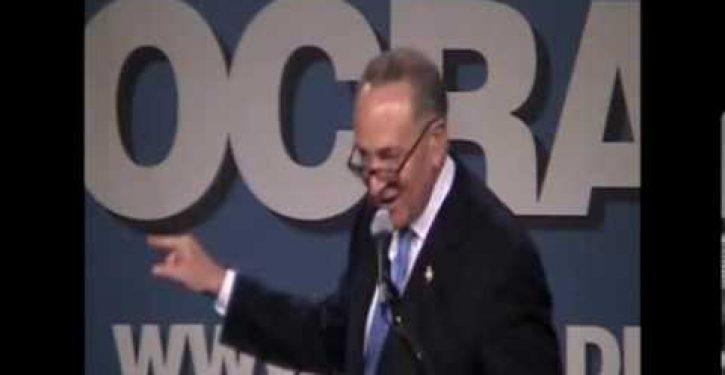 Before the tweets are shared, a reminder on this little-discussed story from 2011:

“I always use the word extreme. That is what the caucus instructed me to use this week.”

When he has not been pushing the new “Organizing for Action” hashtag #RenewUI, Schumer has been relentlessly bashing the Tea Party and making some bizarre and false statements about the economy.

Interestingly, he presses on, despite the clear unpopularity of his tweets.

Not one response to his many derogatory comments about the Tea Party has been positive as of the time of this writing (ahem, including responses by this author).

The Tea Party elixir has not solved the problems as promised & the reality of the decline of middle class jobs/incomes is sinking in.

@chuckschumer Big gov and lifetime politicians like you is what’s wrong. Term limits would take care of paid for crooked politicians. #tcot

@chuckschumer @LadySandersfarm It isn’t the TeaParty’s fault, when you point to us remember 3 of those fingers point back at yourself! — Rhodie Henn (@RhodieHenn) January 24, 2014

@chuckschumer You have a majority in the Senate & a Democrat President. Stop bashing American citizens who you claim to represent. #Teaparty — Renee Nal (@ReneeNal) January 27, 2014

As reported at Liberty Unyielding, the Supreme Court ruling on the Citizens United v. FEC case can be directly linked to the IRS targeting of conservatives. Schumer, and a host of others, urged the IRS to target the Tea Party, and when the targeting was exposed, they initially expressed outrage. Then they created a rule to legalize the political targeting. The GOP establishment just sits back and lets it happen.

Again, people were not impressed.

@chuckschumer A little obsessed with the Tea Party, that means you’re threatened by them. Tea Party’s appeal to the masses growing.#tcot — Lady Freedom (@LadySandersfarm) January 24, 2014

The unhinged Schumer has unveiled a “class war” strategy to pit the “leadership” of the Tea Party against the grassroots members. Sadly, it seems that the establishment GOP has embraced the plot, as reported at Liberty Unyielding. Schumer and his ilk forgets that the Tea Party is not motivated by money or party, but by principles.

To the plutocrats gov’t is the enemy but not to the average, grassroots Tea Party member. — Chuck Schumer (@chuckschumer) January 23, 2014

@chuckschumer Really Chuck? How many grassroots Tea Partiers have you spoken with?

But Schumer kept up the assault against American Citizens, this time claiming that they distorted the purposes for the recession.

Somehow, the Tea Party elite switched the cause and effect of the financial meltdown. — Chuck Schumer (@chuckschumer) January 23, 2014

And, of course, nobody bought that, either.

@chuckschumer Please, please share with us what you think caused the crash and how it is being misrepresented by the eeevil #teaparty? #tcot — Renee Nal (@ReneeNal) January 27, 2014

And so on it goes, back to a bizarre version of class war that Schumer is trying to exploit within the Tea Party.

The American people became angry and frustrated, and the Tea Party elite tapped into that with their Pied Piper solution. — Chuck Schumer (@chuckschumer) January 23, 2014

And again, not one positive response.

Needless to say, the rest of Schumer’s tweets were treated with the same level of suspicion. In fact, as of the time of this writing, there was not one positive response to any of these outrageous attacks against American citizens.

There is a sharp divide between Tea Party elites & their followers. Time for Democrats to exploit it… — Chuck Schumer (@chuckschumer) January 22, 2014

Some of the sceptical responses:

Awww, @chuckschumer, how adorable that you assume that Tea Party is as devoid of principle as the bulk of your voters are!! #cheekpinch — Angela Nelson (@angelaisms) January 23, 2014

You. Are. Insane. RT “@chuckschumer: There is a sharp divide between Tea Party elites & their followers. Time for Democrats to exploit it..”

…and start talking about the rise and fall of the Tea Party, about how many people support smart gov’t programs…

@chuckschumer I can’t wait till @SenTedCruz is our President!

@chuckschumer the government is the problem not the tea party! You’ve been in DC one too many terms!

Although nobody in the Tea Party is buying into this ridiculous tactic, it is genuinely painful that elected representatives who can no longer credibly point to George W. Bush for their failings are now resorting to attacking private citizens instead of engaging in some self-reflection. It is especially heartbreaking that nobody is paying attention to some of the more egregious things, with no basis in fact, that are being said about the Tea Party.

Elected officials and their allies have referred to the Tea Party as radicals, anarchists, extremists, terrorists, unbiblical, legislative arsonists, committing jihad, have bombs strapped to their chests, committing extortion, taking hostages, want to “tear down the house our founders built,” want to “blow up the global economy,” are “holding a gun to the head of Americans,” and are a “2.0 upgrade of the lynch mobs.”

He made some condescending remarks about Senator Ted Cruz, and as usual, bashed the Tea Party.

In this little-noticed speech, Senator Schumer’s statements were not only unchallenged, but applauded.

As reported at Tavern Keepers, Schumer claimed that the Tea Party

Notably, he also claimed that median incomes are dropping due to the “assault on labor.”

He also said that the bad economy was George Bush’s fault.

“When Americans get to a place where they are upset and angry, there are two places that lead them out. One is the path our party has always taken; substantive programs where government works with private industry to provide a path so that the middle class can do better. It’s a positive path based on actually addressing the middle class’ problems…”

But the other path, he said, is the path the Tea Party has taken, which “unfortunately” appeals to the “dark side to Americans character.”

“When things get bad, there are always those who appeal to our lesser instincts…to fear and to anger and to negativity and to division. That is where the Tea Party finds it’s appeal.”

The Tea Party “exploits this anger” and “has gained too much traction.”

Then he said that the tea party was racist, misogynistic and anti-gay.