A piece by David Axe at War is Boring has been flying around the web.  Axe has done a nice job of translating the gobbledygook from this Navy slide presentation into English.  That said, we can add a little focus and precision to his commentary, and a couple of points about the implications of this move.

Although I address just the aircraft carrier fleet here, the new readiness policy will apply to the surface combatant force (cruisers, destroyers, and frigates) and the amphibious fleet as well, with some adjustments and lead time built in.  Where relevant below, I reference the slide number from the Navy presentation on which you can find the information.

At any given time, that second carrier will have to be the one dedicated to the Far East.  It may be the carrier homeported in Japan – or, when that carrier is in a pierside maintenance period in Japan, it will be another Pacific Fleet carrier.  (This isn’t explicitly reflected in the slide presentation, but it’s implied by national policy, which requires immediate response to a Korean crisis with at least one carrier strike group.)

That will be it.  There won’t be additional carriers to deploy for front-line operations.

The reason is money.  It’s nothing more complicated than that.  The Navy doesn’t have enough money to maintain more carriers operationally available at the same time.  If you go through the slide presentation, you’ll see two hints at that reality.  Most of the presentation is devoted to explaining how the fleet will revise scheduling, maintenance, training, etc to adjust to the new fleet response plan.  But the plan’s most basic numbers – 2 carrier groups at a time; a 36-month cycle; one 8-month deployment per cycle (slide 13) – are ultimately driven by the constraints of money.

Here are the two hints:

This terse expression means what I’ve been saying for a year (see here, here, here, and here):  that we have reached a readiness low-point at which DOD will have to go to Congress for more money if it is ordered to plus up its deployed force level for a contingency.  There is zero slack in the level of ready forces, to allow us to “surge”: deploy more than we already have operating forward.

This means that if we need to do something that requires more than the already-deployed forces – such as conduct an attack on Iran’s nuclear facilities – we literally cannot be ready to do it in the short time it would take to merely deploy the additional forces.  The time it will take will have to include making the additional forces operationally ready first.  (A potential alternative is leaving the Far East without a carrier, but that’s only a potential alternative:  even if we’re willing to short our posture in the Far East, two carriers and their air wings may not be enough for the job we need to do.  Under today’s warfighting and technological conditions, if we can’t bring more than two carriers to a fight on short notice, we have simply written off the kind of national security readiness we have maintained for the last 60 years.)

The time to surge additional carriers will probably be months, depending on where the non-ready carriers are in their 36-month cycle, and how much money Congress allocates to preparing them.  The most important aspect of this reality is that the president no longer has the discretion to deploy forces without going to Congress for money, and thus making the political process, both at home and abroad, a very extended one.

There’s good news for Pat Buchanan in this, of course.  His perennial alarms that we are about to strike Iran, whenever two carriers are in the Gulf to swap out on patrol, will be a bit likelier to be predictive.  There will only be those brief windows, one or two times a year, when we might be able to put 2-3 carriers into a fight.  The president now cannot surprise Iran, or increase the urgency of an ultimatum on a short timeline.

In fact, the critical point has been reached at which Iran could very possibly test a warhead faster than the U.S. could get forces surged to the Gulf to interdict Iran’s weaponization effort.  Alerting Iran that we plan to surge those forces could have exactly the opposite of the intended effect.

Slide 17 – The second bullet on this slide gives a useful view of the difference money makes to readiness levels.  Under the current fiscal constraints, it takes 5 carriers to keep 1 in a fully ready – operationally available – status.  This is because the maintenance and training required have to be done serially rather than simultaneously: the costs of keeping more carriers ready, for each 5 we have, can’t be paid at the same time.

Moreover, we can’t keep 1 carrier ready for every 4, or fewer, because the time required to do that kicks in.  Some kinds of necessary maintenance and front-end training simply take the time they take.  Trying to keep 1 carrier ready for every 4, for the money we have to spend today, would mean holes in the schedule: periods when we wouldn’t have any carrier operationally available.

But, as the bullet says, the Navy could keep 1 carrier operationally available for every 3 carriers, instead of 5, “should resources ever become available.”

That’s the money clause.  With it, this bullet quietly conveys our readiness retreat.  For about the last 30 years, it has been a rule of thumb for scheduling and fleet readiness that it takes somewhere around 3 carriers to keep 1 operationally available.  (The formula has varied between 3 and 4, sometimes closer to 3 or to 4 depending on things like the impending retirement of an old carrier, the accession of a new one, or the placing of a carrier in dry dock for reactor refueling.)

Now the Navy is saying the funds just don’t line up for that, and we will have to retreat to a less-ready posture: 5 carriers keeping 1 carrier operationally available.

This readiness retreat is likely to make some lawmakers more, not less, interested in getting rid of some of our carriers.  It would probably be useless to point out to those lawmakers that cutting the carrier force below its current level will mean the Navy can’t keep even two carriers operationally available at a time.  To the lawmakers in question, carriers we can’t afford to keep operationally available look like project cars on blocks in the driveway.

Keep all this in mind, the next time you hear John Kerry say – as he did on Thursday – that “the military option of the United States is ready and prepared to do what it would have to do.”  That doesn’t mean what it sounds like.  A more accurate statement would be this one: “We will decide what we can do militarily based on budget constraints at the time.  It may or may not be sufficient to make a difference.” 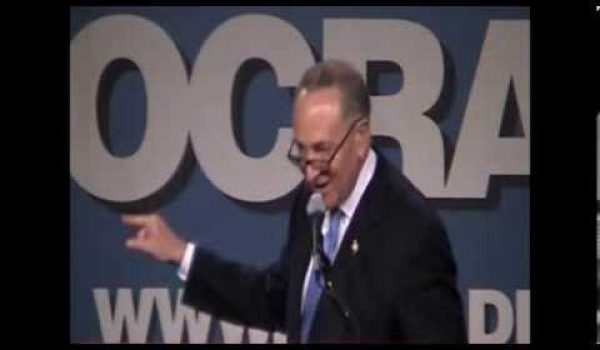 Chuck Schumer blames Tea Party for the ills of the world
Next Post
Like ‘banning marriage’ is a bad thing?