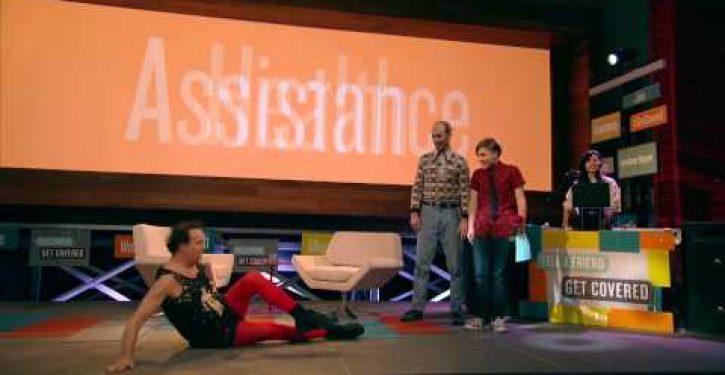 We aim to bring you only the best in politics, culture, and social commentary here at Liberty Unyielding.  So we are especially proud to introduce video clips from the six-hour Covered California online marathon, hosted by Hannah Hart.

The purpose of the marathon, which ran on Thursday 16 January, was purportedly to get young people to sign up for insurance through Covered California, by “celebrating the 35 million Americans who now gain access to affordable health insurance under the Affordable Care Act.”

It was about as strange as could be expected of such a presentation.  Video clips from it are going viral as you read this, and in the best possible way:  as hilarious examples of utter lunacy.  There is zero chance that anyone will sign up through Covered California because of this marathon, or its video offspring.

Here is the most popular segment, the dance-off between Richard Simmons and Nathan Barnatt:

But Mr. Simmons tearing up as he urges people to “get covered” is not to be missed.

Other cultural luminaries who contributed to the presentation include Tatyana Ali, Marlon Wayans, Frank Shamrock, Tamika Butler, Sick Jacken, and the Fung Brothers.

Tyler Durden and FITSNews remind us that it isn’t just the chump California taxpayer who shelled out for this cultural outreach:

Covered California received $43 million worth of federal grant money last year to “educate targeted audiences about the subsidy programs available to them and to motivate consumers and small businesses to be part of obtaining health insurance.”

During the 2012 Olympics, the world was treated to a bizarre dance-worship spectacle celebrating the British National Health System, and I wrote about it at the time as evidence of a sick, demented culture.  It’s 18 months later, and America – with our daily-evolving national health system barely 100-odd days old – is already putting up the dance-worship rituals.  The paganism sets in quickly with this one.